Earnings season is upon us once again! Earlier I shared with you a calendar of earnings reports I consider to be the most important. Here I’ll describe why I think so and group the stocks together with other similar stocks. 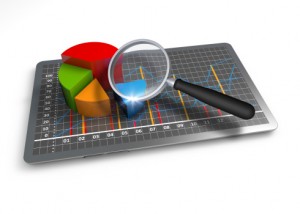 Below is why roughly 40 stocks matter to you.

It may seem a little daunting to track dozens of stocks instead of just a few. I get it. That’s why, instead of offering you ten stocks to watch during earnings season, I’ve put together ten groups of earnings reports to watch. This is the first part of that list.

Some of these earnings reports offer a glimpse at the economy as a whole. Others offer us a new chapter in the tale of a battleground stock.

CSX (NYSE: CSX) operates trains that move our goods. Caterpillar (NYSE: CAT) produces the machinery that moves the earth and drives the economy. FedEx (NYSE: FDX) ships items around the world and provides other services to businesses.

Pay attention to these three earnings reports, as many investors use them as a way to gauge the overall strength of the economy.

As oil prices are dipping further and further, so too are many oil-related stocks.

The last time SeaDrill (NYSE: SDRL) declared earnings the company announced that it was cutting its dividend, sending the stock lower by more than 20%. Shares of the deepwater rig company are more than 75% below its 52-week high. Even if the stock doesn’t bounce after earnings, the management’s commentary should offer great insight into what is happening in the industry.

The same is true for the earnings reports of ExxonMobil (NYSE: XOM), Halliburton (NYSE: HAL), Transocean (NYSE: RIG), Baker Hughes (NYSE: BHI), and Slumberger (NYSE: SLB). These companies may be feeling the pain but what management says – and how it says it – is really important to me this earnings season.

Theoretically electric car-maker Tesla Motors (Nasdaq: TSLA) and the solar energy industry’s rising star SolarCity (Nasdaq: SCTY) are likely losers with cheap oil making electric alternatives less appealing. However, I’m of the mind that these two companies are winners over the long run so I’m very interested to see how they do in a cheap-oil world and what management says about the future.

As the price of oil falls, consumers have more money left over at the end of each month. This increased discretionary income is likely to continue boosting a number of stocks.

Kinder Morgan (NYSE: KMI), an oil pipeline owner and operator, seems an unlikely pick to win when oil is cheap. But Kinder Morgan doesn’t explore or drill and it doesn’t buy or sell oil. The company owns key pipelines used by various oil companies and charges a toll. As long as demand is solid, Kinder Morgan will be fine. And with oil prices at 6-year lows, demand for oil is likely to pick up.

Apple (Nasdaq: AAPL), which makes an appearance elsewhere on this list, is another likely beneficiary of cheap oil. With more money in their pockets, consumers are more likely to spring for the new iPhone, the more expensive phone with more memory, or that app they might not have otherwise paid for and downloaded.

Airline stocks are another natural winner in the new era of cheap oil. As recently as the third quarter of 2013, fuel costs accounted for roughly 40% of Spirit Airlines’ (Nasdaq: SAVE) total operating expenses. A major cut to these expenses is a huge windfall for Spirit and all of the other airline stocks.

I’ll be watching for earnings reports from Spirit, Delta Air Lines (NYSE: DAL), United Airlines (NYSE: UAL), American Airlines (NYSE: AAL), JetBlue (Nasdaq: JBLU) and Southwest Airlines (NYSE: LUV). In addition to lower fuel costs, consumers with more money in their wallets tend to travel. It’s for this reason that these airline stocks, as a group, have significantly outperformed the market over the past several months and will continue to do so in this cheap-oil environment.

Cheap oil is also likely to boost Wal-Mart Stores (NYSE: WMT) which is frequented by a demographic that is particularly sensitive to extra money provided by cheap oil prices.

There was a time during which the stability of the major financial institutions was all anyone cared about. The health of the big banks may not be of the utmost importance to the market anymore. But with these banks responsible for huge amounts of lending activity and financial services, how they perform and what they have to say is quite important.

Earnings reports from banks like Wells Fargo (NYSE: WFC), Goldman Sachs (NYSE: GS), Morgan Stanley (NYSE: MS), Citigroup (NYSE: C) and Bank of America (NYSE: BAC) should offer us a glimpse at the health of our economy and lending activity.

eBay (Nasdaq: EBAY) has plans to spin off its PayPal division sometime this year. As an early mover in peer-to-peer payments, PayPal has a chance to capture another market – peer-to-peer mobile payments. Its Venmo service is free, incredibly simple and incredibly useful. I’d like to hear a lot more about it and PayPal’s growth from eBay when it declares earnings.

Starbucks (Nasdaq: SBUX) is also making waves with its mobile offerings. The Starbucks mobile app has driven tremendous customer loyalty and grown rapidly. Surely the company will tell us more.

I’m also very interested to hear from Apple in this regard. Apple Pay was first used during the final quarter of 2014 and I’m eager to hear any metrics that Apple will give us with which to measure its success. These metrics may also come from points-of-sale, such as Whole Foods Market (Nasdaq: WFM), or from the big banks that support Apple Pay, such as Wells Fargo.
Tomorrow I’ll share my final five groups of stock earnings reports to watch. For now, take a look at whether you own any of these stocks and how these earnings reports will directly affect your portfolio.

Disclosure: I personally own shares of Apple, SeaDrill and Wal-Mart Stores.