Oil prices are down.

Since March, the price of West Texas Intermediate Crude (WTIC) has fallen roughly 16% to around $91 per barrel. There are a few factors behind the price decline. Stagnant economic growth, reduced demand, and high inventory levels lead the list.

Not surprisingly, many oil stocks have fallen over the past six months. Welcome the buying opportunity. Oil prices, despite near-term concerns over the world economy, are destined to stay high – with WTIC averaging $100 per barrel – for at least the next few years.

Firms that specialize in finding new oil will benefit over the next decade. While easy-access oil is going away, oil companies need to discover another 20 million barrels of daily production just to keep pace with current demand requirements.

Turmoil can lead to market-thumping return if you remain focused on the long-term trend. For example, this past January near-term turmoil in healthcare dropped the share price of Omega Healthcare Investors (NYSE: OHI), a long-term care REIT. But by focusing on the long-term trend of an aging population, I was able to add an investment that has subsequently returned 35%.

If investors are willing to look beyond today's tumultuous oil market to the long-term trend, they'll find that Diamond Offshore Drilling (NYSE: DO) and Total SA (NYSE: TOT) shares offer enticing entry points, especially when compared to their March highs.

Diamond will surely benefit from higher oil prices. It specializes in contracting large rigs to deep offshore oil drillers. These drillers go after fields that are only viable in an environment of sustained higher oil prices. It's been a slumping business of late, to be sure, and Diamond's shares are off 13% from their 52-week high. The upside is that the lower share price has pushed the yield up to 5.5%.

But as oil prices once again adhere to the longer-term trend of elevated prices (prices have been rising again over the past month), offshore drilling activity will heat up. After all, more than 70% of the planet is covered in water, so there is obviously a greater chance new oil will be discovered under the ocean than on dry land.

Investors don't have to wait to be rewarded, though. Diamond already pays a $3.50 annual dividend, which is easily covered by earnings. Diamond should earn $4.50 this year and $5.28 in 2013. What's more, Diamond is one of the more conservatively structured companies in offshore drilling, with a debt-to-equity ratio of 34% and $1.4 billion in cash.

Because of its high cash level, reduced price, high yield, and long-term growth potential, Diamond Offshore is an exceptional opportunity for investors demanding both yield and price appreciation.

But don’t wait. The stock is making a strong run, gaining more than 15% off a late-June bottom. 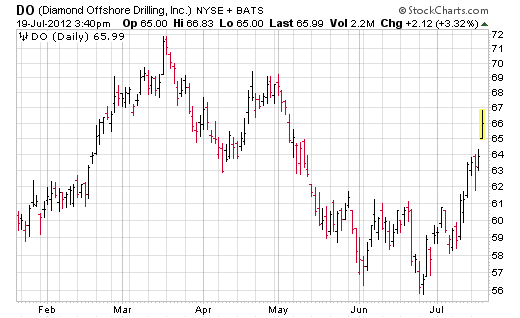 Diamond Offshore Drilling may be a bargain, but Total SA (NYSE: TOT) just might be an even better bargain. The French oil giant is a contemporary and competitor of large U.S. oil giants ExxonMobil (NYSE: XOM) and Chevron (NYSE: CVX), which means its operations extend to the four corners of the earth.

That said, you could hardly tell that Total is an integrated oil major when you look at the popular measurement matrices. ExxonMobil's forward P/E multiple based on projected 2012 earnings is 10.8. Chevron's is 8.5. Total's forward P/E is a mere 6.1. As for dividend and yield, there is no comparison: ExxonMobil yields 2.7%, Chevron yields 3.4%, and Total yields 7.1%.

Total shares have fallen roughly 18% since the beginning of March. There are a couple of issues at work here.

One is the strengthening dollar, which could lower the income U.S. investors receive. Another is ongoing costs associated with the clean-up of a natural gas spill that occurred a couple months ago in its North Sea operations.

However, both these issues are temporary. The U.S. dollar has likely ended its run-up, as it’s likely the Federal Reserve will pursue another round of money pumping.  As for the North Sea gas spill, it will likely be mopped up before the end of the year.

Yet even with these issues pressuring Total, the company is still expected to grow EPS by another 7% in 2013, which translates to a ridiculously low 5.6 P/E multiple based on 2013 earnings of $7.96.

And while Total hasn’t enjoyed the rally that Diamond has of late, the stock is trending higher after bottoming out at the 42 level. 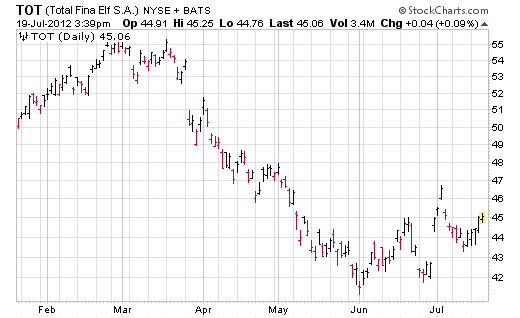 I see little downside risk and lots of upside potential in both Diamond Offshore Drilling and Total SA. What's more, patience for waiting for that potential to materialize will be rewarded with a high-dividend payment and a market-beating yield.