Editor’s Note: Thought I would pass along this piece by analyst William McCanless. While his forecast may seem outlandish, his earlier predictions about the world economy, particularly the severity, spread, and impacts of the coronavirus all the way back in late January have been spot on.

The following is a true story, and if you don’t learn the lesson it has to teach about the U.S. dollar – you could lose everything. So, pay attention and do not take this lightly.

The Invention of “Flying Money”

In A.D 750, tea merchants in China were getting tired of hauling large amounts of gold, silver, and iron across long distances to make transactions with suppliers.

So a new type of service organically sprung up in the land – Money Shops.

The Money Shops came up with a novel idea – they would create paper notes (made of fine materials) that were redeemable in the underlying metal it represented.

This allowed merchants to deposit their metal currency in one location and carry the value of that currency HUNDREDS of miles away to another location.

Once there, they could go to the local Money Shop, deposit their notes, and receive the value of that note in gold, silver, or iron.

People came to call this fei-ch’ien or “Flying Money.” And it was a revolutionary idea that allowed for easy, simple transfer of value over long distances.

This grew in such popularity and facilitated trade at such a large scale, that people became accustomed to primarily using Flying Money in every-day life, while keeping their large quantities of metal deposited somewhere else.

This is the first time in human history anything like this had ever been done.

It wasn’t long before the Government looked at the increasing popularity of Flying Money and began to feel threatened by the growing power of sixteen merchant houses that had banded together with the goal of honoring each other’s receipts to create a uniform paper note.

So they formed a commission consisting of a lawyer, a transportation commissioner, and a provincial judge to figure out what to do with this paper money.

The written records quote, “The system ought to be taken over by the government… and a separate bureau instituted for its purpose. Since a stop was put to the notes of exchange, the merest handful of people have been coming to the markets to buy and sell. It would have a useful stabilizing effect if private notes were to be abolished and official ones produced in their place.”

With that decree – the State monopolized the printing of “Flying Money.”

On January 12, 1024 the Sung court directed the imperial treasury to issue national paper money for general use and nobody was allowed to use anything other than the Government note or they would be imprisoned (or worse).

Down the Slippery Slope

At first the State treasury backed up every paper note in circulation with precious metals.

But then in 1077, then Minister of Finance Shen Kua had a GREAT idea.

This is what he told the emperor:

In accordance with this theory, the treasury began increasing the circulation of money by printing large quantities of notes – far more than could be backed up by precious metals held in reserve.

At the beginning – 100% of printed currency was backed by precious metals reserves.

The Government profited immensely – they issued and controlled the currency, established its initial value, and printed more whenever they wanted and all along the way they collected conversion fees.

The more the Government saw how easy it was to pay its obligations on paper by simply printing currency, the more liberally they printed.

But something strange happened – the prices of goods and services began to rise incredibly quickly.

It took more and more printed money to pay for the same things.

And then…the currency became worth zero and people refused to use it.

This happened over the course of 100 years from introduction to collapse. 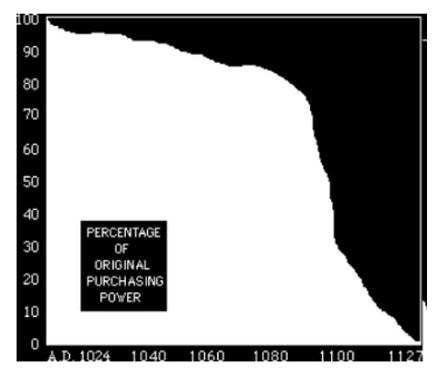 But that wasn’t the end of paper money in China.

In fact, this SAME story repeated itself over the course of 600 years and across five individual ruling dynasties.

Each one began their own paper currency after the other collapsed.

Every time they did so, they swore to the public that it would be backed up by precious metals in reserve. The notes – in other words – were as good as the gold in the vault.

However, very quickly, the Government would reduce that to anywhere from 40% to 25%.

Then? They would cut the relationship between Government-issued paper currency and precious metals completely.

In each case – from introduction to collapse – it took about 100 years.

If you build a graph of every Chinese dynasty over that six-century period from the introduction of their currency to its collapse – it is almost always EXACTLY a 100-year cycle. 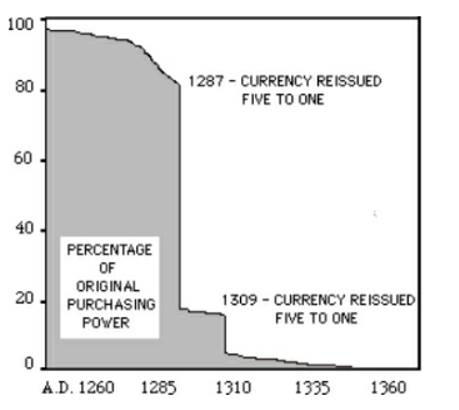 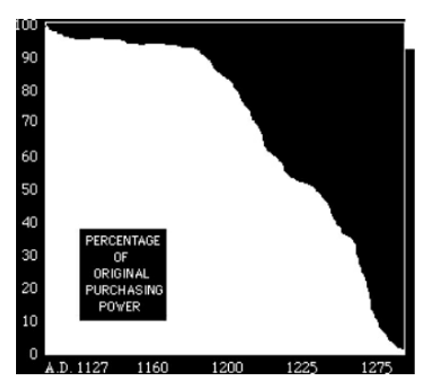 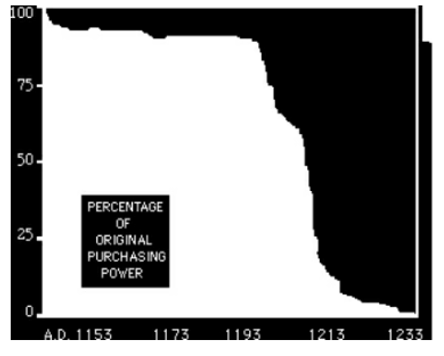 Every time the story was the same.

According to author Ralph T. Foster, who has written extensively on this subject…

“Over the course of 600 years, five dynasties had implemented paper money and all five made frequent use of the printing press to solve problems. Economic catastrophe and political chaos inevitably followed. Time and time again, officials looked to paper money for instant liquidity and the immediate transfer of wealth. But its ostensible virtues could not withstand its tragic legacy: those who held it as a store of value found that in time all they held were worthless pieces of paper.”
Is Time Up for the U.S. Dollar?

Does any of this sound familiar to you?

In 1933 during the Great Depression the United States government confiscated everyone’s gold under threat of imprisonment and forced the population to use fiat paper money.

After WWII – for a short while – the US Government issued currency that was backed up (partly) by gold.

In the early 1970s that relationship was completely severed.

And since that time… 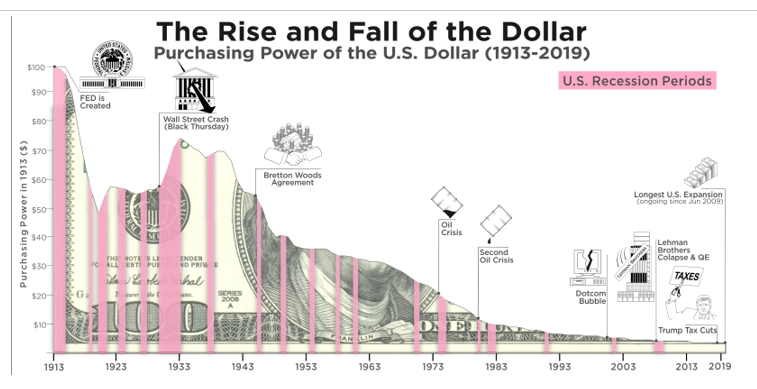 We are approaching 100 years since the US Government began actively devaluing its currency.

It’s time to begin preparing yourself for the very real possibility that the U.S. dollar could be coming to an end.

The solution is to make as MUCH money as you can NOW – and then preserve the value of it no matter what.

There is a solution we have been working on to help you do that.

CLICK HERE NOW << Register for our new webinar to see how to get ahead of this.

This story isn’t over – please pay attention to your inbox tomorrow.

P.S. If you want to make as much money as possible and then SECURE it against future chaos – you MUST click here now.