You can’t go a full day without reading or hearing that. Even our new Federal Reserve chief, Janet Yellen, said it last week, singling out biotechs and social media stocks as being particularly overvalued. She was merely echoing what numerous Wall Street analysts and CNBC talking heads have been saying for the better part of a year.

And yet stocks continue to rise.

The S&P 500 reached yet another all-time high above 1,990 in midday trading on Thursday. That’s nothing new. Stocks have been shattering records for the past 18 months.

Eventually, this five-year, post-recession bull run will come to an end. A major correction is undoubtedly coming. But it won’t necessarily have anything to do with valuation.

Going strictly by the numbers, stocks are indeed overvalued. The S&P is trading at 15.7 times estimated earnings for the coming year, well above the 10-year average forward P/E of 13.9 and higher than it’s been at any point since before the recession (see chart below). 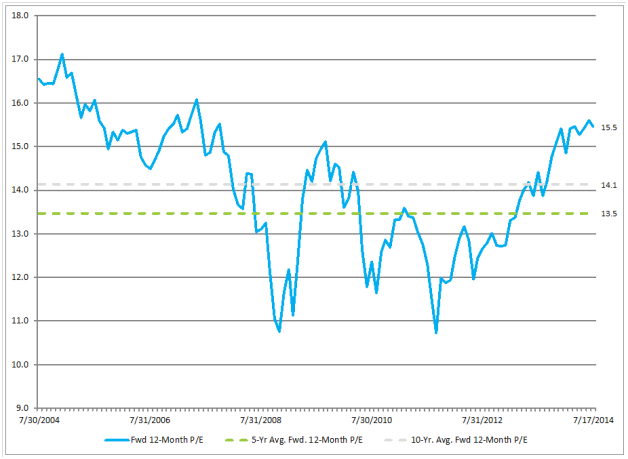 I’m sure analysts looked at those valuations back then too and called for a mass correction at every turn. Like now, nothing could slow the bulls’ momentum – no matter how overvalued stocks seemed.

The average investor doesn’t pay much attention to valuation. They buy the stocks they like at a price they can afford. Sentiment dictates investor behavior more than P/E ratios. When everyone else is buying, the average investor thinks he or she should be, too.

Valuation can certainly be a useful tool when determining which stocks look like bargains. We do quite a bit of value investing in our $100K Portfolio. But valuation isn’t the sole determinant for how stocks will perform. Some stocks defy all valuation logic.

Facebook (Nasdaq: FB) began public trading in May 2012 at 100 times earnings. People scoffed at the high valuation, and sold off Facebook shares in droves for more than a year. Now the stock is trading for exactly double its IPO price … and its P/E still hovers around 100.

One of the biggest winners in the $100k Portfolio, Tesla Motors (Nasdaq: TSLA), has never turned a profit, and therefore has no P/E ratio. But that hasn’t stopped the stock from rising 480% since we bought shares in February 2013.

There are myriad other examples of stocks that have risen for years despite having high P/E ratios or no earnings at all. Amazon (Nasdaq: AMZN), LinkedIn (Nasdaq: LNKD) and 3D Systems (NYSE: DDD) are a few that immediately come to mind.

Valuation does matter. If stocks become too overvalued – like they did during the dot-com bubble around the turn of the century, when stocks were trading at more than 30 times earnings – eventually that bubble will burst in the form of a nasty market crash.

However, I do think valuation is overblown. The question “Are stocks overvalued?” has been dominating the financial headlines since last summer. While the answer may be yes, it hasn’t stopped markets from motoring further into record territory on almost a weekly basis.

Eventually, something will slow this market. But it won’t necessarily be because it’s overvalued.

Discover the New Highway that’s being Built Across America

This highway is unlike any that you’ve driven on before. And it will soon utterly change the way you drive.  It will have less of an impact on the environment, save you money, and drastically reduce the US dependance on foreign oil. That means increasingly keeping your hard earned dollars in your pocket and also in the American economy. For investors, this is an incredible opportunity. You see, the one company at the center of this new highway is on pace to DOUBLE in value very soon. I’ve put my money where my mouth is… and invested my personal savings in this stock! And I’d like you to get in before shares take off — which is why I prepared a brand new report on this highway and the company behind it.

Click here for all the details on this company — before its shares DOUBLE!