All is quiet on Wall Street right now. Too quiet. 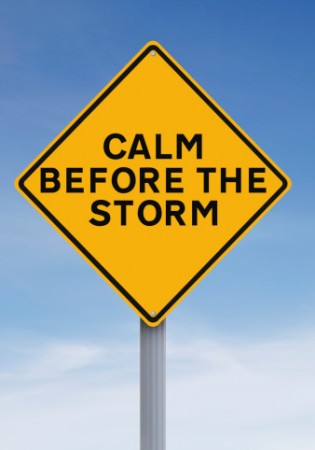 Stocks have scarcely budged in the last four trading days, a product of historically low volatility. The S&P 500 is down seven points, or a mere 0.33%, since last Thursday.

Volatility, as measured by the VIX, is just off its lowest point since 2007. Year-to-date, the volatility index has fallen 20%. The last time the VIX was this low, it doubled within six months.

Of course, those were different times. In 2007, we were on the cusp of a global recession. Fortunately, another recession does not appear imminent.

The tight trading range could be more of a concern than the historically low volatility. Friday and Monday were two of the four least volatile trading sessions of the last 20 years, with intraday trading ranges of 0.25%. It had been 1,787 days, or seven years, since such a narrow intraday range had occurred. Now it’s happened twice in the last week.

When stocks trade in a narrow range for an extended period, a huge breakout usually follows. The question is: will the breakout be to the upside or the downside?

With stocks already at all-time highs, and in the midst of the “Sell In May” period, it’s easy to predict that a downward breakout is coming. But this rally has been anything but predictable. Every time so-called Wall Street experts have insisted that a mass correction is coming, stocks have risen to new record heights.

So what exactly is going on? Are investors simply bored, or have they all left for the summer? Volume is fairly normal, so it can’t be the latter. Perhaps it’s a matter of a powerful rally going up against seasonality. In essence, it’s a tug of war between the bulls and the “Sell In May, Go Away” bears … and neither side is winning.

Eventually, one side will win. They always do. At this point, it would be foolish to try and predict which way the breakout will occur. All logic points to a correction; but this rally has repeatedly defied logic.

All I’ll say is that a major breakout is likely coming. That’s what happens when volatility is this low, and trading ranges this narrow.

Let’s hope the bulls have gotten their second wind.