When the market starts swooning and volatility picks up, investors naturally turn toward certain sectors and away from others.  One preferred destination in dangerous times is the utilities, the safe haven of choice for widows and orphans.  Another is the consumer staples sector, where food makers such as Kellogg Co. (NYSE: K) tend to buck the trend exquisitely.

Among the least desirable stocks to own in a general market downturn are growth stocks, where the hot money tends to coalesce during good times, and flees like a rabbit during the bad.

Here’s a chart that clearly illustrates the foregoing.  It’s a graphic of the S&P 500 (SPX), the Dow Jones Utilities Average (DJUA) and Apple (NASDAQ: AAPL) all in one. 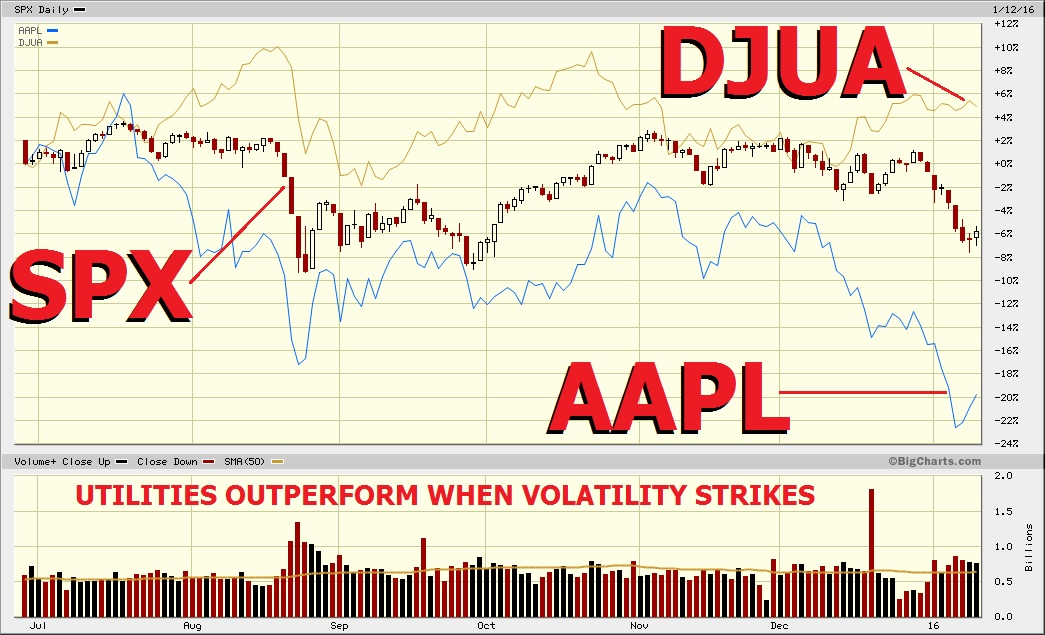 Since the market began effervescing this summer, it’s clear where investors’ attentions have turned.  Several spikes higher for the utilities (light brown line) prove that sector remains the go-to location for scared money. The group is up 5% over the period shown as against the S&P 500’s 6% loss.

High fliers like Apple (light blue line), however, have been the clear losers.

Apple may have declined for its own fundamental reasons, but a look at companies like LinkedIn (NASDAQ: LNKD), Alibaba Group (NYSE: BABA) and Tesla Motors (NASDAQ: TSLA) show that all the big growth names got a wrecking ball hit with this latest bout of selling.

At times like this, it’s worthwhile for traders to consider pairs trading – i.e., matching sectors that have consistent patterns of negative correlation.

Why?  Because if you believe, as I do, that the latest action is extraordinary, then it stands to reason that when normal trading patterns resume, we’ll see a reversion to the traditional relationships between these groups.

Let’s look at one such trade. 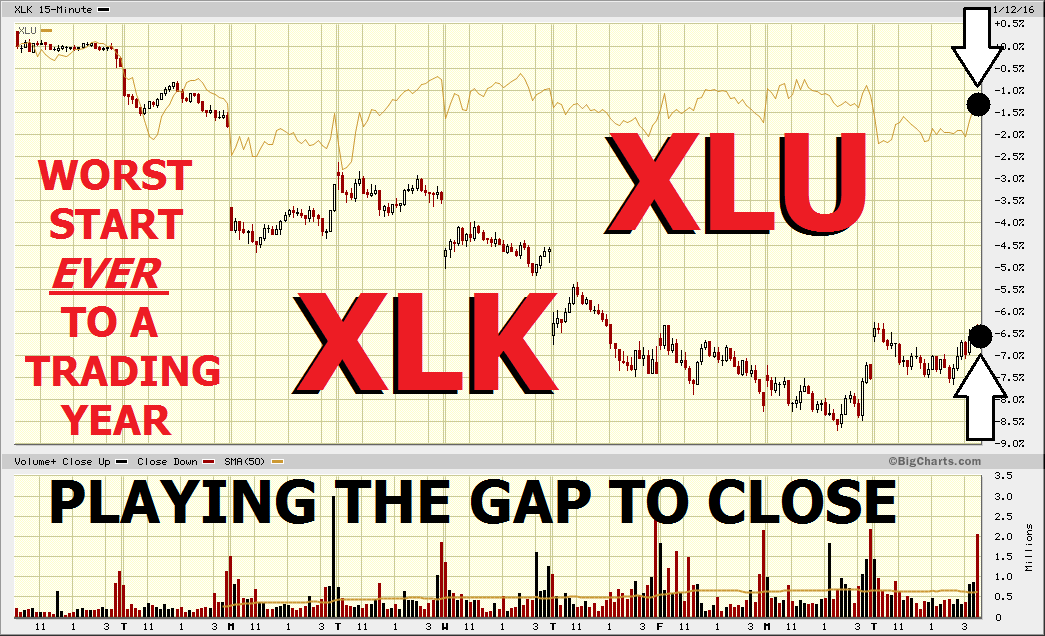 As you can see, the last few weeks have seen a safe haven run to XLU while the rest of the market, including XLK, have retreated in the worst ever stock market start to a year.

But when the market begins to climb again, as I believe it will in short time, the gap between the two (black dots) should narrow dramatically.  And we could very well see XLK overtake XLU in due time.

With that in mind, I recommend that you purchase calls on XLK and sell an equal number on XLU to offset the cost of the former.  It’s called a zero premium trade and the details go like this:

Should the market continue to tumble, both options will likely expire out of the money. But should it rise, we’re betting on XLK ascending faster.

The trade wins on any outperformance of XLK over the next five months.  If it rises faster or falls slower than XLU, we win.