A week ago, real bombings in Boston sent Wall Street into a brief state of panic. Today, a fake bomb scare created even briefer hysteria.

This chart shows the strange dip and the massive increase in volume: 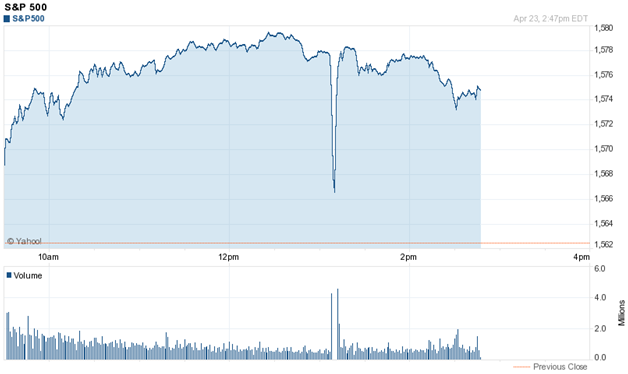 Obviously, the damage was very short-lived this time. But if a false alarm can create this kind of panic, it raises even more concerns about investing safely in the 21st-century marketplace.

The rise of social media as an important source of breaking news leaves Wall Street vulnerable to false reports like this. Things like hacked accounts and premature claims by anyone with a smartphone and a Twitter account can put your stocks in unneeded jeopardy.

Today’s false alarm only lasted a few minutes. What if next time it takes all day to expose a fraudulent report? If you’re a day trader, that could mean losing your shirt for no reason.

If nothing else, today’s AP Twitter hack is a not-so-subtle reminder that your investments are subject to more ridiculous outside factors than you think. At any moment, Wall Street traders could suddenly be frightened into a mass sell-off of a perfectly good company.

Volatility has been muted in recent months. But in today’s turbulent and ever-changing news (or fake news) cycle, it can return at the click of a nefarious tweet.