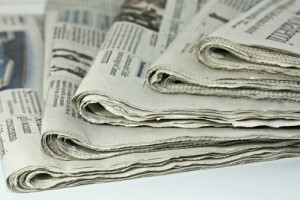 Despite these performances, legendary investor Warren Buffett continues to gobble up local newspapers for the holding company he heads, Berkshire Hathaway (NYSE: BRK-B).

There is certainly no shortage of reasons for the decline of the print newspaper industry.

The most obvious is the Internet. Social media, for better or worse, is where many, especially the young, get their information about what is going on in this planet and in their world. Despite these inexorable trends, Buffett recently purchased The Martinsville Bulletin and The Franklin News-Post, two small-town papers in rural Virginia.

Small-town newspapers present much different business models and potential for investments than a New York Times or Chicago Tribune. Berkshire Hathaway now owns 31 dailies and dozens of weeklies in 10 states. These small-town dailies and weeklies carry news that is not fodder for the Internet. That results in a solid presence in the local community, both for business and personal end-users.

This kicks off the cash flow that Buffett is always seeking.

The two biggest costs for a newspaper, staff and paper, do not affect a small-town publication as much. Major players in the print press like The Chicago Tribune, Los Angeles Times, New York Times and others have to have sizable staffs to compete for stories at the national and the international level. No one reads The Martinsville Bulletin or The Franklin News-Post to find out what is going on at the Federal Reserve  or in the Middle East. The operating costs are small smaller, producing more income for the owners.

From that, other ventures can be funded.

The Martinsville Bulletin and The Franklin News-Post are not going to put The New York Times or The Los Angeles Times out of circulation.  But the cash flow and return-on-equity from newspapers is robust. As the chart below shows, The New York Times and Tribune Publishing Co. are lousy investments in terms of being publicly traded companies. But as privately held vehicles generating cash and return-on-equity with healthy gross margins, these are very attractive:

Newspapers also provide “the float” that Buffett craves. That results from receiving payment for a good or service before it has to be provided. Generally, that is associated with premium income from an insurance company. But “the float” is generated by newspapers, too. The most obvious is when a subscription is paid for the year ahead.

It is the cash flow produced, not the Pulitzer Prizes pulled in, that has Buffett investing in community papers rather than The New York Times or The Chicago Tribune.