Did you buy Freeport McMoran (NYSE: FCX) when I said to back in September of 2010?

If you didn’t, then you’re getting another chance today to buy this company (the world’s largest copper miner) for less than you would have paid back in September 2010. 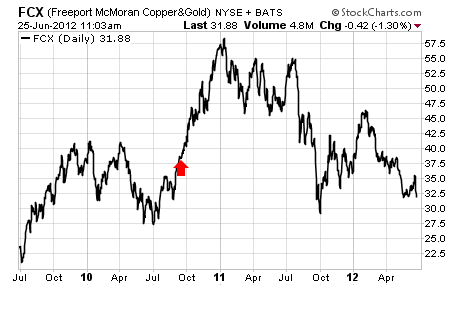 I know, it might seem like I’m touting my ability to advise you to buy stocks when they’re cheaper than the last time I recommended them. But the fact that this great copper mining business is selling for less than it did two years ago is good news for everyone who wants to own it.

That kind of statement might be confusing or even laughable to you. Most analysts and financial editors would not make a point of telling you about a stock that’s down from their last recommendation.

But it’s my job to tell you about opportunities to buy this type of world-class copper investment when it’s on sale – regardless of whether the investment is “down.”

To reiterate in another way: unless you had planned or needed to sell Freeport McMoran in the interim period between today and September 2010, you should be ambivalent about this stock’s price performance.

And if you want to own more shares of Freeport, you should be happy that the price is lower. To delve a little deeper, the earnings per share on Freeport stayed about the same between now and two years ago – so it’s a simple thing to see that you can now buy this company cheaper on an earnings basis too.

That’s an important distinction. If Freeport’s earnings had dropped between September 2010 and today, it would be a more complicated question.

Back when I first wrote about Freeport, it sold for around 10 times trailing earnings and paid an annual dividend yield of 0.7%.

Today, Freeport sells for less than eight times earnings and pays an annual yield of nearly 4%.

Could Freeport get cheaper? Of course. And if it did (assuming no other change in earnings, debt, production, etc.) I would tell you to buy it again.

The price of Freeport today has nearly nothing to do with what it’s likely to be tomorrow, or two years from now.

Especially now that Freeport pays a healthy dividend – you should be thrilled to pay this price today, knowing that you’re getting a great business at a low price.

Anything other than this kind of valuation is trading or speculation – which are fine methods of growing your wealth, but it’s my experience that they’re more difficult to implement for individual investors.

I’d buy Freeport at anything under $35 and I’d hold it forever to collect a 4% dividend that will probably go up more than it goes down.