What is even more amazing is that during this bull market run the S&P has gone approximately 1,450 days without a 10% correction. The steady climb higher has no doubt made almost everyone exposed to equities a winner since 2009.

But the charge upward has slowed down dramatically over the past eight months. Since the beginning of November 2014, the S&P 500 has pushed higher roughly 5%, and most of those gains came in the last two months of 2014.

The market has remained relatively flat in 2015, vacillating between slightly positive and negative. There is no doubt that uncertainty has entered the market.

So, as an investor, are we supposed to sit on our laurels and allow Mr. Market to dictate our returns?

We all look like financial geniuses when the market is going higher. Investors take all the credit for their success when the market is soaring, but blame other factors, such as geopolitical concerns or central bankers, when investments sour. The talking heads make sure the culprits are front and center to make the blame game that much easier.

But, I don’t really care.

I care about volatility. I care about probabilities. I want every single trade I make to have a high-probability strategy wrapped around it, and an increase in volatility allows me to increase my pot-odds even further.

But before I go down that road, let us get back to market uncertainty for a moment.

The S&P 500’s lackluster performance over the past eight months has had a direct correlation with the return of volatility. There is no doubt that we are in the early stages of a bull run in volatility, and in the past, bull markets in volatility have lasted five to seven years.

So far this year, while the market has remained flat, we’ve managed to outperform the market substantially using high-probability options strategies.

The strategy is known as a vertical call spread or bear call spread. And it can put instant income in your pocket.

It’s a type of options strategy used when a decline, or at least limited upside, in the price of a stock or ETF is expected.

For example, let’s assume that the SPDR S&P 500 ETF (NYSEArca: SPY) is trading at roughly $208 and you expect there is limited upside over the next seven to 50 days. As a result, you decide to use a bear call strategy. I say seven to 50 days because with options we have the ability to customize the duration of our trades.

By definition, a bear call spread is achieved by selling call options at a specified price while also buying the same number of calls, but at a higher strike price. 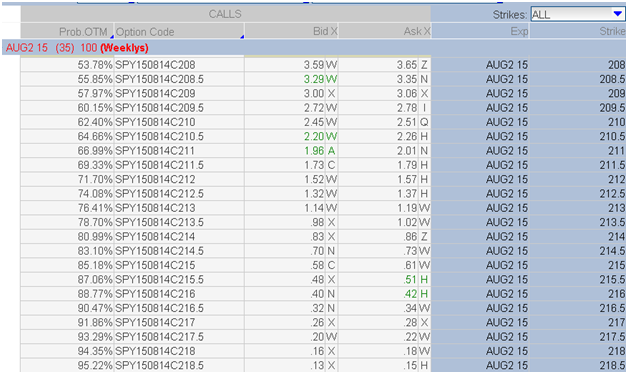 It’s a more conservative trade, but we have increased our probability of success by roughly 5% while maintaining a decent 17% return over the next 35 days.

Are you starting to see why so many professional options investors use bear call spreads as their bread-and-butter strategy?

If you would like to learn how I use this strategy, among several others, sign up for my free webinar which will be held Thursday, July 16 at 12 p.m. EDT. I will go over in great detail how I use options selling strategies with a high probability of success to make consistent monthly income.

I realize that for some of you these concepts are completely foreign, but I can promise you that once you begin learning about how options can work to your advantage, you will never go back to just using a buy-and-hold strategy.

There’s just too much opportunity to put your hard-earned money to work in more effective ways. Whether you want to provide another source of monthly income or just protect the hard-earned profits in your buy-and-hold portfolio, options are the ticket.

I hope you can join me in what is becoming the fastest growing sector in the investment world.