He turned $1 into $27 with one simple strategy.

The great Peter Lynch – a mutual fund manager at Fidelity – delivered average annual returns of 29% to investors in his fund over a 13-year period by following a very basic investment principle:

Invest in what you know.

Simply put, Lynch invested in companies that he personally knew and understood.

Why? Well, simply because there’s too much information out there for any single individual to be able to understand and process in a meaningful or useful way. Not only do the facts change on a daily basis – so do the rules.

AND so do the investment choices (stocks, bonds, ETFs, SIVs, MBS, and REITs)..

Information is moving fast and it’s tough to stay current – even for an analyst like myself who follows the news daily. That’s why it’s important to take the Peter Lynch strategy of investing deadly seriously.

Apple (NASDAQ: AAPL) is a business that everyone knows and understands. The company also happens to be announcing its quarterly earnings this month.

First of all, despite its huge size and fast growth over the past decade, Apple is still a rapidly growing company with several smash hit products.

The unit sales growth of the iPhone is staggering considering it has been around since 2006. In 2011, unit sales increased 81% to 72 million.

The iPad also looks to be another blockbuster product. While it hasn’t been around as long as the iPhone, iPad unit sales rocketed 334% to 32 million last year.

However, AAPL also carries something else that makes it a stud investment: cash. And cash is essential in an uncertain economy.

Fortunately Apple has nothing to worry about when it comes to cash. The company’s cash stockpile recently swelled to a staggering $100 billion.

To put that in context, Apple’s cash position is larger than the market caps of 95% of the companies in the S&P 500. 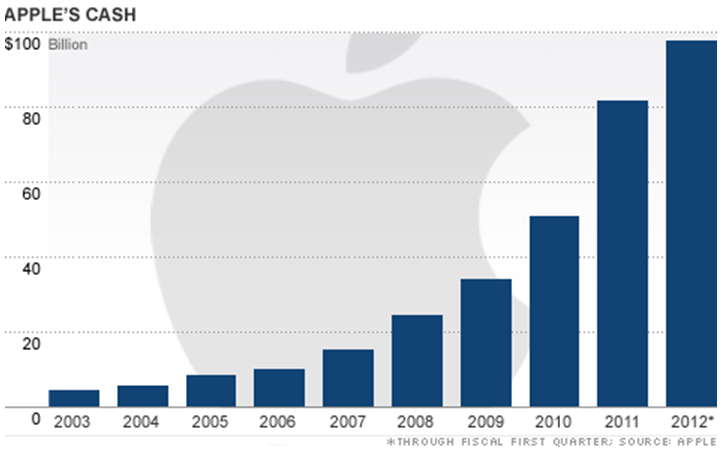 AAPL continues to grow its cash base.

Apple is still a rapidly growing company. Additionally, it can reward shareholders by putting that large cash balance toward new products or to increase their newly announced dividend.

Despite its financial achievements, the shares of Apple are actually cheaper than ever.

For the current year (ending September 2012), analysts expect Apple to earn $46.84 per share. When we compare the expected EPS to the enterprise value (calculated by subtracting $117 cash per share) of $475, we arrive at an enterprise-value-to-earnings-ratio of 10.

Though its $550 billion capitalization suggests otherwise, Apple is a growth company. More importantly, it has a business we all understand.

Peter Lynch advised investing in companies you understand when they trade at a discount to fair value. While he doesn’t invest anymore, Lynch would likely be buying AAPL at today’s price.