Best Buy (NYSE:BBY) is a classic case of a company that screwed up by not adapting as consumer shopping habits evolved.

In 2012 rumors began to swirl that the once great company would wither and die like Blockbuster and Circuit City. These companies became obsolete when consumers found better prices, convenience and customer service elsewhere.

But Best Buy is not dead yet. It has made some massive changes. It’s beginning to fight back, reinventing itself and working to give customers what they want.

I recommended Best Buy stock to 100% Letter subscribers in July at $28.20, and the stock is up 38% since. But I’m not writing this to pat myself on the back. The fact is I was late to recognize the opportunity. Best Buy stock was $11.50 at the beginning of the year.

But it’s better to be late to jump on a success story than to never jump at all. And despite the stock’s recovery, I see this turnaround story as still in the early innings. Best Buy has another 45% upside over the next year. And longer term, I see it as having multi-bagger potential. Here’s why.

Most great turnaround stories begin at the top, with management. Best Buy’s turnaround strategy is following this path.

Leading the charge are two executives well suited to navigate the new world of retail: Hubert Joly as CEO and Sharon McCollam as CFO. Both were hired in the second half of 2012 after the prior CEO, Brian Dunn, resigned.

Joly had been CEO of Carlson Travel and a partner with McKinsey & Company. McCollam was previously the CFO and CEO for Williams-Sonoma (NYSE:WSM). This team is focused on the future, not what may have worked in the past.

Under Dunn’s guidance Best Buy had become irrelevant. Once the retailer ceased offering competitive pricing, good customer service and a user-friendly shopping experience – both online and in stores – the deal was off.

The customers who did enter the store – and there were fewer each month – window shopped but purchased elsewhere. Online retailers including Amazon.com (NASDAQ:AMZN) were vastly superior in almost every way.

Joly and McCollam are showing that in the world of consumer electronics and appliances, brick and mortar is not crumbling.

The company certainly has a lot of room for improvement in this department. In recent quarters it has converted only around 40% of its 600 million annual store visitors into buyers. That’s not a good conversion rate.

Its recovery strategy aims to improve in-store conversions by revamping store layouts and incentivizing employees. The new layout gets rid of odd product categories (like musical instruments) and allocates more space to revenue generators including appliances, mobile devices and tablets.

Best Buy is also becoming cool again. The company added In-Store Brand Name Shops for both Samsung and Microsoft (NASDAQ:MSFT). This strategy should show that major software and hardware companies see value in brick and mortar locations, and result in foot traffic and overall sales growth.

This layout also complements the existing floor space dedicated to Apple (NYSE:AAPL). But in contrast to the Apple space, Samsung and Microsoft stores are operated by employees from those companies. This suggests a much higher (and shared) commitment and incentive for all involved.

Employees are now compensated, in part, based on customer satisfaction metrics. Employee empowerment, and motivation, is largely credited for helping the turnaround effort at Home Depot (NYSE:HD). I expect it to be an integral part to this story as well.

Best Buy is also building a new online presence, an area where it has struggled. The website has previously not been intuitive or user friendly, especially as compared to the competition.

Of the 1 billion visitors to BBY’s website annually, only 13 million actually buy something. That means the company’s online conversion rate is a paltry 1.3% according to data from Credit Suisse. That’s among the worst in the online retail marketplace. 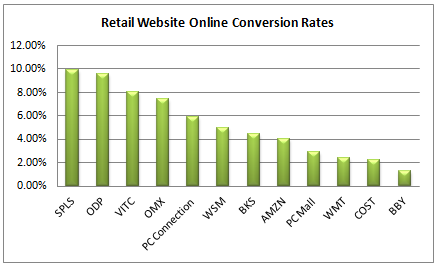 Clearly this is a huge problem … which means that it is also a huge opportunity. To increase online conversions BBY is implementing modern search capabilities and completely revamping its supply chain to assure products are available and delivered quickly.

It’s also slashing expenses and closing underperforming stores. Companies don’t “save their way to growth” but they can save their way to increased profitability. So far it’s on target to slash its goal of $725 million in operating costs.

And maybe the most important thing is that Best Buy now has a price guarantee and a customer loyalty program. These will go a long way toward increasing consumer confidence when shopping BBY as compared to AMZN and other online-only options.

The turnaround isn’t going to happen in just one year. It will have to build on itself over time, and it won’t be linear. In Q2 earnings came in better than expected. Domestic sales comparisons, while down slightly, also beat consensus estimates.

On November 19th, we’ll find out how the company performed in Q3. I think we’ll see continued improvement.

Mark my words: Best Buy’s turnaround is just getting started. Best Buy stock has 45% upside over the next year, and multi-bagger potential over the next three.