We’re only ever weeks away from life-changing price shocks – at most.

It could be a matter of days until you can’t afford to buy any number of vital commodities.

Corn is just the latest eye-popping example of what happens when political-based money systems begin to break down and fail.

Such a system would take its direction from the market’s needs and pricing mechanism. I’ll note that such a pricing mechanism has worked flawlessly for centuries to provide goods and services to the people that want them at the lowest possible price.

To belabor the point, a political-based currency lets politicians and dictators direct wealth where they like, instead of where the market dictates where it’s best rewarded or needed.

Simply put, a government has difficulty in conjuring corn or gold or silver into existence. These types of assets can’t be summoned. But money, for most of modern history, has been divorced from “realness.”

Whereas you would not be likely to confuse a picture of a piece of corn with actual corn, most people today gladly and willingly confuse money tokens with money itself.

To further belabor: paper is not money! Even when a piece of paper legally documents ownership of something, the piece of paper IS NOT the asset it represents. You can’t live in the deed to your house. The title to your car can’t drive you to work.

But today, a Federal Reserve Note lays no legal claim to anything. It’s just a fancy piece of paper, only laying a claim to its own existence.

The price we pay? That would be higher costs for every REAL good, service, and commodity that exists.

Sure, fake-money apologists will blame weather for higher corn prices. But the world corn market is “shocked” by weather every year in one region or another. Weather can cause short-lived price increases. But that’s not what we’re experiencing right now.

The only rational explanation for the sustained higher corn prices we’ve seen over the past 5+ years is a reckless monetary policy from our central bank and the phony money system underscoring that bank.

Take a look at this chart showing corn prices since 1992: 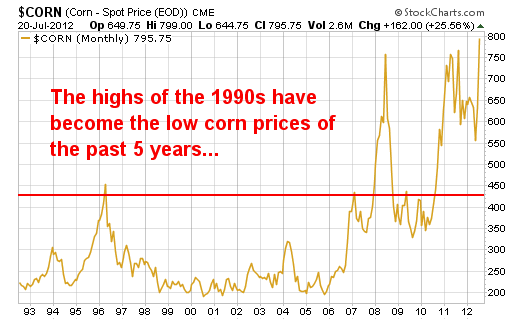 They went to broke and corrupt financial institutions and corporations. That’s where the extra money is, and that money is now being put to work to chase the price of scarce resources higher.

Invest accordingly – this ride is far from over.