It’s tough to say exactly how long it’s going to take to get a resolution of the
Greek debt/bailout situation. Every time it seems like progress is being made,
the process takes a step backwards.

For an interesting perspective on the Greek situation, and what a debt default
might mean, I’d like to introduce you to one of the newest members of my team,
Rick Pendergraft.

As a 20-year veteran, Rick has successfully navigated some of the biggest
economic booms and busts. And he’s got some very interesting ideas about the
Greek debt situation, and how you can navigate this period in investment
history.

Over the last few months the financial news has been dominated by news out of
the Eurozone and in particular about the national debt of Greece. Will they
default? Will they get another bailout package? What will the impact be on the
global financial system?

All of this talk led me to look back at the summer of 1998 and the Russian debt
default that derailed the global financial system and led to the collapse of
Long Term Capital Management (one of the largest hedge fund firms in the world
at the time).

My thoughts lead me to a comparison between the two countries and the potential
impact. In 1998, Russia’s Debt to GDP ratio was 57 percent. Their GDP was $220
Billion which means the national debt was approximately $131 Billion. The total
world debt of sovereign nations in 1998 was just over $27 Trillion making
Russia’s share of the world debt approximately 0.47 percent.

Jump ahead 13 years and the picture of Greece isn’t that different. Greece’s GDP
is $330 Billion and the debt to GDP ratio is at 144 percent. This means that
Greece’s total debt is in the neighborhood of $475 Billion. The world’s total
sovereign debt has tripled since 1998 with the total standing at $82 Trillion in
2010. This means that Greece’s debt as a percentage of the total sovereign debt
in the world is 0.57 percent.

When Russia went into default, it seemed to catch the financial markets off
guard at the time. The news about Greece’s issues has been in the headlines for
over a year now. Anyone still holding Greek debt that is caught off guard by a
default has taken the ostrich approach and buried their head in the sand. Anyone
that bought Greek debt in the past year took a gamble, hoping to take
advantage of the extremely high interest rates and counting on a bailout.

Keeping with the comparison, I decided to take a look at the chart of the S&P
500 back in 1998. What we see is that the Russian debt default had a sharp but
brief impact on the U.S. stock market. The S&P dropped over 14 percent in August
of 1998. 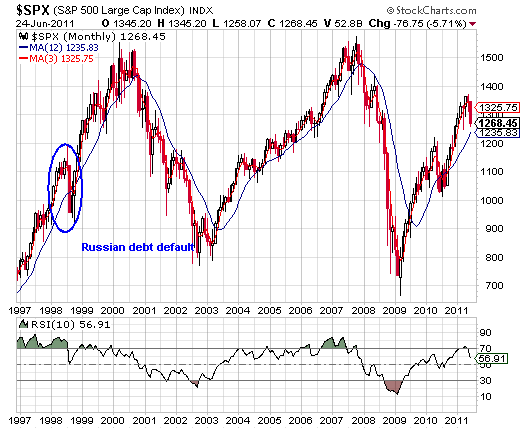 I circled the drop from August 1998, but I want you to look at what happened
leading up to the default and what happened in the ensuing months. Essentially,
the news of Russia defaulting on its debt erased the previous seven month’s
worth of gains. It also took the S&P just over two and a half months to erase
the decline.

If we look at today’s market, to erase the previous month’s gains, the S&P would
need to drop down below the 1,200 level. The loss was 14 percent back in 1998.
For the S&P to decline 14 percent from the high in May, the S&P would need to
drop to 1,178 or another seven percent.

The point is, even if Greece defaults on its debt, it should not mean the end of
the world. In fact, it could lead to a tremendous buying opportunity. We might
not have hit bottom just yet, but the levels of sentiment and the move from
overbought levels to oversold levels have certainly made equities more
attractive.

So How Do You Play It?

Looking at the weekly chart of the S&P, we are at the midpoint line of the trend
channel. We could see a technical bounce from the oversold levels and from the
support, or we could dip down to the lower rail of the channel over the coming
weeks. 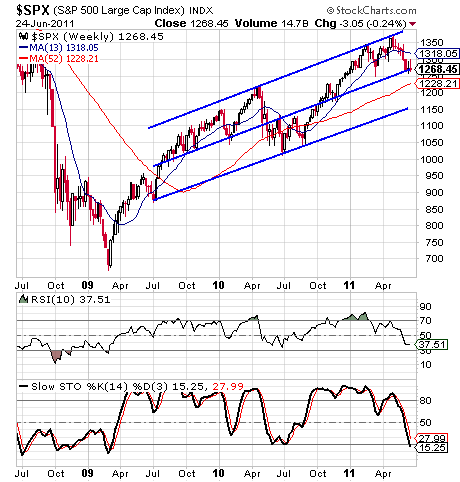 What I have been doing for my investment management clients is moving half of
their cash into ETFs that I feel are the best opportunities right now and
leaving half in cash. If we dip down to that lower rail I will add to the
positions. The extreme oversold levels and extreme pessimism from the sentiment
indicators suggest a bounce is near. But rather than dive in head-first with
everything, I prefer to wait and make sure the support holds.

I hope you’ve enjoyed Rick’s thoughts and analysis on the Greek debt situation.
If you’re interested in learning more about the ETF investment strategies Rick
uses, you can check out ETF Master Portfolio HERE.