When the price of gold is rising, gold equities are typically the place to invest. That is of course unless their costs are rising even faster. And that's been the problem over the last year-and-a-half.

In short, company-specific challenges break down the “leverage” argument for gold mining stocks.

When miners feel their margins are under pressure, their stocks get slammed. Lower profits per ounce drawn out for years in the future wreak havoc on most financial models, and therefore crush target prices for mining stocks.

One need only look at a three-year performance chart of the Junior Gold Miners ETF (NYSE:GDXJ) versus gold to see how this has played out. Gold is up around 55%, but the GDXJ is slightly negative.

On the flip side, when margins are expected to expand for several years, mining stocks rise rapidly, typically faster than physical gold. You can see how that scenario played out in late 2010 and early 2011 in the chart above.

It's during these periods of expected margin expansion when gold mining ETFs like the GDXJ are a good investment. That’s because an entire group of mining stocks needs to rise in order for the investment to work. If that's not my expectation, then I'd rather pick a handful of companies I like because of their specific operations, and ignore the rest.

When the current pain for gold miners will end is anybody's guess, but I think we're getting close. Costs can rise only so far so fast, and all things considered the price of gold is staying reasonably strong. GDXJ is a way to play a recovery in gold equities as costs began to flatten out. Thus far, that hasn't been confirmed to be the case, but I believe we're getting closer and investors can average into GDXJ to play a rebound. 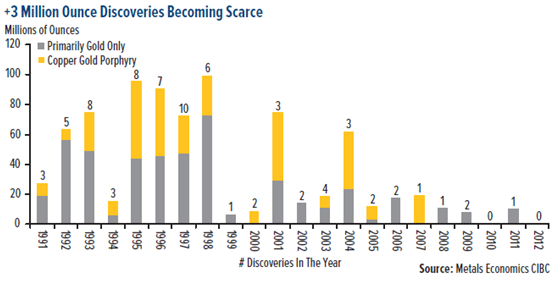 The GDXJ remains a great way to play this strength while avoiding operational risks associated with any one stock. As I've stated before, I don't view it as a long-term holding since volatility within its portfolio can cancel out gains. But as a way to play an expected, broad-based rise in junior gold mining equities, the GDXJ is the way to go.

If you're looking to buy individual mining names, I'd suggest buying only those with cash costs below $700 an ounce, which is about the industry average at the moment. Miners with cash costs well below $700 should enjoy fatter profit margins and potentially more upside in their share price (and less downside risk).

The following chart from CIBC World Markets shows an average breakdown of “all in” costs to mine an ounce of gold. Based on this chart, most miners are looking at around $200 in profit per ounce. 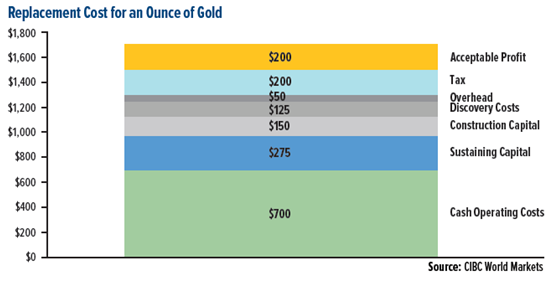 While GDXJ is great for junior gold mining exposure, those looking to keep life simple should stick with the iShares Gold Trust (NYSE:IAU) as the easiest way to play into physical gold's strength.

It is reasonably safe to say the re-election of President Obama has helped to keep the bull case for gold intact, especially given that Fed Chairman Ben Bernanke is more likely to remain at his post with Obama in office.

That said, I'm not in the “gold to $4,000” camp. But I do believe it's entirely reasonable that a bit more quantitative easing in 2013 will help push gold toward the $2,000 an ounce mark. The current low-interest rate environment (which will have to end someday, at which point gold could really rise) continues to support gold's attractiveness as a place to simply park money.

Given that outlook, the IAU remains the easiest way to play physical gold. It is cheap, liquid and about as straightforward an investment as you'll find.