Despite the fact that the broad market is in record high territory, there is ample evidence suggesting the good times are not over.

The fact is that while stocks have been rising, so have earnings. And that means that on a valuation basis many stocks still trade in an attractive range.

When the market closed yesterday the S&P 500 was trading at 18.6-times trailing earnings. That’s a little above the index’s long-term average PE of 15.5, but still well below bull-market highs that were reached in 2000 when the index’s PE topped 30, and in 2007 when it hit 22.

It’s now clear that we’re enjoying another bull market in stocks, aided in part by historically low interest rates, an improving U.S. economy and – to be frank – unattractive alternatives to stocks.

Underpinning all of this is the fact that companies are doing well where it matters most, on the bottom line. And as I stated earlier, many stocks are still attractively priced based on historical valuations.

Alternatively, say the index were to trade up to a PE of 22, like it did in 2007. That valuation target implies 20% upside.

Of course if earnings and valuations both rise, the index could move beyond 20% to 60% higher. But let’s not get ahead of ourselves here.

The chart below plots the S&P 500’s historical PE and helps to put this discussion into context. Note that the extreme swings are the result of stock market crashes, which throws off the price-to-earnings ratio. This is why I’ve quoted bull-market PEs above, rather than historical highs. 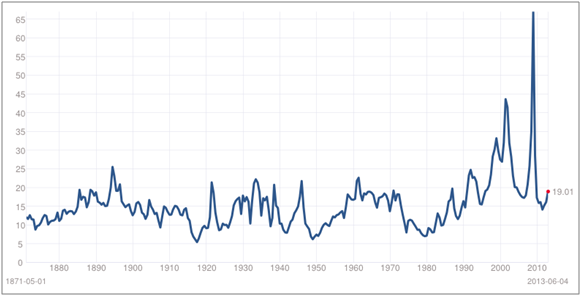 My point here isn’t to convince you that we’ll see the S&P surpass 2,600 in the near future. But it is possible that the index will continue to rally toward this threshold if earnings continue to rise.

So while major U.S. stock indices – like the S&P 500 – are enjoying a steady rally, there are still extremely attractive stocks out there. Long-term investors should stay the course and continue to look for the types of stocks that can return outsized gains and lead to true wealth.

In fact, over the past number of years I’ve found that there is one common thread among almost all of these best-performing stocks.

This “common thread” isn’t a reasonable PE ratio for the S&P 500 Index, but something that is far less evident to everyday investors. And it can help you find the market’s best performing stocks, especially during a bull market.

I’d like to invite you to learn more about the secret “common thread” during a live investing seminar next Thursday at 2:00 pm ET called, “The Secret to Finding 100% Winners.”

Along with our Chief Investment Strategist, Ian Wyatt, we’ll be discussing the powerful investing secret that has underpinned the success of the market’s best-performing stocks. We’ll also be taking your questions during a live question-and-answer session.

And we’ll wrap things up by discussing a stock that has huge potential over the next year, and is showing telltale signs of this “secret” signal.

It will be a fun event, so I hope you’ll take the time to join me for The Secret to Finding 100% Winners.

Remember, the live event starts Thursday, June 13th at 2 pm ET and is only open to a limited number of investors. Make sure you can attend to get all the details on my strategy for finding stocks that can double in as little as 12 months … Click here to reserve your seat today.