One U.S. dollar could buy you one euro in less than a year.

Meanwhile, the U.S. dollar has steadily climbed 6.5% in two month, clearly benefitting from the turmoil in Europe. Until policy makers in Europe can form a viable solution to the debt crisis, the dollar could be the best investment in the world.

European policy makers cannot seem to solve the debt crisis fast enough. The entire euro zone is in trouble and countries such as Spain, Portugal and Greece are on the brink of default.

Make no mistake – there is not an easy solution to those financial woes.

The Germans appear to be making matters worse by threatening to leave the euro and adapt the deutschmark. However, that strategy would be both reckless and costly.

A departure from the euro would increase unemployment and decrease economic activity, not to mention the potential costs from loans (that thus far have been transferred) going unpaid. While Germans may not admit it publicly, they understand the need to bailout the weaker nations.

As affirmation, George Soros put it best, “Germany will always do the minimum to preserve the euro.”

Unfortunately, the bare minimum is not enough for investors anymore. Last week, the ECB did the minimum and announced a 0.25% cut to its main interest rate and cut the deposit rate to zero.

Although a rate cut is inherently inflationary, it does not always drive a currency lower. A lack of confidence in the currency can have the same negative result. Last week, it was investor uncertainty, not inflationary prospects, underpinning the decline in the euro.

The interest rate reduction was widely expected and market makers would have priced in any inflationary backlash. Instead, investors pushed the euro lower because it was a less aggressive stance than they had hoped for from the ECB.

A bigger rate cut appeared possible this time around since the economic conditions worsened over the past quarter and many countries likely entered modest recessions. Amid the economic deterioration, the euro declined to its 2010 lows.

Investors have completely lost faith in the currency, which is down around 18% from a February 2011 high of over $1.49. The currency will not recover until the European debt crisis is resolved. 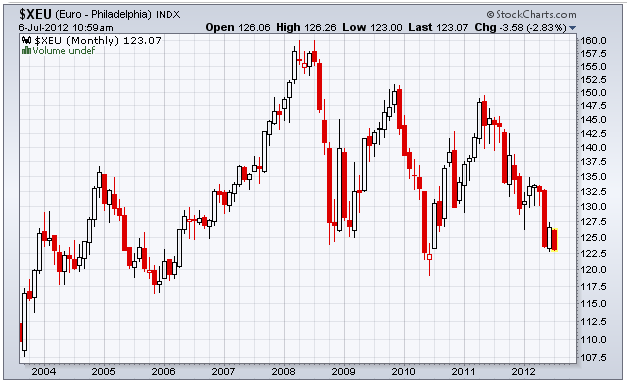 Currencies typically depreciate when economic conditions decline. Since austerity slows economic growth and the deleveraging cycle in Europe will likely last another year, expect further declines in the euro.

European leaders have shown themselves to be behind the curve since the credit collapse in 2008. Last week’s pathetic interest-rate cut showed investors that European leaders may not act fast enough if the need arises.

This conservative thinking could eventually drive the euro to $1.

All of Europe’s major economies are heading towards recession. At the same time, European leaders remain cautious and undivided. The deleveraging, economic slowdown and political divide all point to a lower euro.

The safest bet in the world may be the dollar.