For just a small example of how out of touch and economically illiterate our Congressmen are, all you have to do is to listen to Representative Jerome Nadler, D-NY.

Representative Nadler has held his seat since 1992, which puts what I’m about to say in stunning perspective.

Nadler believes that if we mint a $1 trillion platinum coin (as is the legal right of the U.S. Treasury, according to the Constitution) and deposit it at the Federal Reserve Bank, that it would buy us some time as we approach yet another debt limit.

One of the obvious problems is that the Treasury doesn’t have $1 trillion worth of platinum lying around.

At current annual platinum production levels, it would take over 100 years of worldwide production to save up enough platinum to make the coin.

So, assuming Representative Nadler isn’t completely unintelligent, we have to come to the conclusion that he believes we should mint a $1 trillion token out of a much smaller amount of platinum. For instance, maybe we mint a 100 ounce coin – which would contain a little over $150,000 worth of platinum.

The coin would bear the stamp “$1 Trillion.”

I mean, we already print “$1” on each and every dollar bill, despite the fact that each bill has an intrinsic value close to a few cents – if that.

This trillion dollar coin idea underscores the problematic nature of our entire monetary system. Each dollar printed has no real value. So why not print up trillions more in order to pay our debts?

That’s exactly what we are doing – though not in such an obvious way as Representative Nadler would have us do.

What Nadler, most of Congress and most Americans don’t realize is that you can’t simply create wealth with a printing press, a coin minting or with the click of a mouse button.

If that were the case, then everyone would be rich. Everyone can click a mouse button.

So if our nation’s supply of money represents the total combined saved wealth from our production and hard work – then anytime you ADD more currency units, you necessarily DECREASE the value of every currency unit in existence.

Politicians and bankers don’t want you to know or realize this fact. And it’s easy to get caught up in the hoopla. When the Federal Reserve buys bonds, it creates money out of thin air. That money finds its way eventually into asset classes – into things that do exist – and it raises the price of those asset classes.

We’ve seen this price raising phenomena in stocks and bonds.

But its best seen over the long term in gold.

Every time we see a marked increase in money supply, we see a near-equal percentage rise in the price of gold. 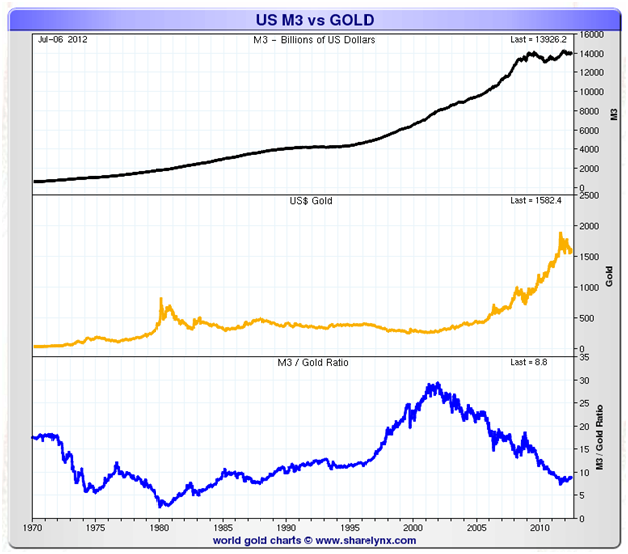 So while the Treasury probably won’t mint a $1 trillion coin anytime soon, you can be quite certain that they’ll have to continue creating other forms of dollar currency units – which will have the continued effect of destroying the value of the dollar and buoying the price of gold.