Last week was the best week for the market in over two years. The S&P 500 jumped 7.4 percent, its largest weekly gain since March 2009.

But like curing a hangover with "the hair of the dog" this central bank gift will do more harm than good in the long run.

That’s because it’s too late for Central Bank fixes to actually fix anything.

Europe has acted too late to fend off crushing debt and now there is an enormous risk of a ‘Lost Decade’ recession – or possibly a depression as a result.

Essentially, the central bankers have decided to once again kick the can down the road. By keeping the world afloat through money creation, the world is destined for the only logical outcome: the complete debasement of currencies, particularly the euro.

The market seems to believe that some interest rates were cut – which would signal yet more capital flooding into stocks. But it’s simply not true. The "rate cut" last week only referred to interbank lending of dollars, or LIBOR – lowering the rate of swaps between Canadian, American, Chinese, European, Swiss and Japanese central banks. That’s it.

The coordinated effort by the central bankers doesn’t actually address Europe’s government-debt and budget woes. They still exist. The PR spin from CNBC et al tries to convince investors that all of the European concerns have been resolved, but in reality the move was simply about saving the banks.

And while the banks are certainly an issue, the European debt crisis still lingers. A few days prior to the central bank announcement Wolfgang Munchau, columnist for the Financial Times, opined that if the EU was not able to formulate an ambitious three part plan to save the Euro, the EU risked collapse.

His three point plan consisted of an ECB backstop, a timetable for a Eurobond, plus an agreement on a fiscal union. We will find out soon enough if the three part plan is enacted this coming Friday at the European summit. Even if a grand plan is schemed will it really bring Europe back to a normal state of affairs?

But, I would like to make the same point I made in my ‘Trade of the Decade’ article last week.

The U.S. and other leading economies have exhausted every effort to inject life into the global economy and we are left with bleak GDP growth and inevitable inflation woes.

Yet, with bonds of leading economies becoming ever riskier, the world is still looking to the U.S. for a stable return – or what many on Wall Street call ‘the safety trade.’

This could last for several months, if not several years. And with more money piling into U.S. Treasuries, interest rates could push even lower.

Just look at what effect ‘the safety trade’ has had on U.S. bond prices. Remember that as yields fall, bond prices rise. 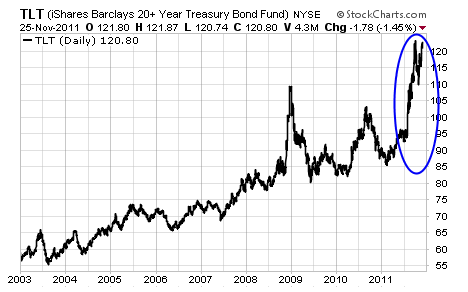 The 10 year chart of the iShares 20+ Year Treasury Bond Fund (NYSE: TLT) above is evidence of how interest rates and the bull market in bonds has evolved since 2003. If you look towards the blue oval you will notice what should be the final stages of the decade long bull market in bonds. There is no doubt that the move in 2011 has been parabolic with Treasury bonds soaring over 40%.

Fortunately for the bond bulls, given all of the world’s troubles, ‘the safety trade’ still looks intact. But, how much longer can rates stay at record lows? Realistically, the reward is now to the downside.

And that is exactly why I think shorting TLT or buying TBT is the best way to take advantage of the inevitable inflationary environment that the global economy will experience from keeping interest rates low through various money creation strategies.

There are several ways to invest/trade TLT and TBT.

You could buy TBT or short TLT outright. If I was not comfortable using options I would probably look towards TBT as it is cheaper than TLT and does not require shorting an ETF.

However, as an options trader with short to intermediate-term goals, I am more inclined to buy TBT calls or TLT puts with as much duration as possible. As always if you have any questions, comments or concerns, feel free to drop me a line at [email protected].