Wyndham Worldwide (NYSE: WYN) is showing its age. The giant hotel chain operates a variety of high-end, mid-range and discount hotels under such brands as Wyndham, Ramada, Days Inn and – brace yourself for a real blast from the past –Howard Johnson’s. 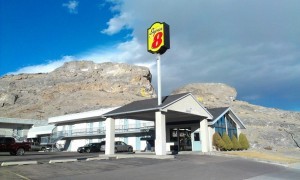 Wyndham has has suffered declining sales and revenue this year and has responded with plans for a pretty major facelift.

To be sure, the Wyndham rebranding is a good, and probably an essential move in an industry that attracts business on the basis of fresh paint, clean swimming pools and free Wi-Fi. But the Wyndham rebranding may not be enough for this aging chain to attract customers who have a growing number of lodging options.

Back in 1925 when Howard Johnson’s was founded, for example, there was no Priceline.com, no Airbnb, and no Internet, for that matter. Inexpensive, clean hotel rooms offered a real value proposition. But that’s changed quite a bit now that consumers have the option of bidding rock-bottom prices on unsold rooms in five-star hotels, or other less traditional options like renting a room in a private home.

This is not to say that the hotel business is a bad business to be in. To the contrary, we recently highlighted the merits of the combination of Marriott International (NYSE: MAR) and Starwood Hotels & Resorts Worldwide (NYSE: HOT). Industrywide, room occupancy rates are up and while there is price competition, it is possible for the larger chains to achieve real economies of scale.

But to be frank, Wyndham is no Marriott. While its 8,000 hotel properties make it a pretty big player, several of its chains have seen better days.

With a chain as large as Wyndham’s, which spans more than 70 countries, it can be difficult for even management to get a sense of the overall room quality. One good way for an outsider to assess the amount of work that needs to be done is to consider online reviews. One recent reviewer of one of Wyndham’s discount chain offered a two star review wrote this after a recent stay: “Glad this place was cheap as it is in need to a refresh on the inside.” That comment was pretty representative of the feedback for many of Wyndham’s locations.

Is it possible to update an aging brand? Of course it is, and Wyndham says it is committed to a major rebranding.

The problem is that these sorts of projects involve a lot more than a fresh coat of paint, and it can take a lot of time and money both to refresh the rooms and then convince consumers to give these tired brands another try.

In other words, Wyndham has a long road ahead of it. Even Wyndham’s decision to take on this major overhaul was 18 months in the making.

To be clear, this is not a company in freefall. Its revenue has actually grown in recent years, to $5.54 billion last year, from $5.28 billion in 2014 and $5.01 billion in 2013, while net income has increased at an even faster clip, reaching $612 million last year, from $432 million two years earlier. Clearly there are many travelers who value a cheap room over new carpet. But over the past year, Wyndham’s quarterly sales and income have both been drifting lower.

Wyndham’s stock price is down about 5% year-to-date, but it has more than doubled over the past five years. With a current price-earnings ratio of around 13, it’s cheaper than both Marriott and Hilton Worldwide (NYSE: HLT)

This long-term stock performance  shows that, despite its recent troubles, Wyndham has a long history of strong growth. Today there remains value to be unlocked across its extensive properties.

But there are a lot of variables for would-be investors to consider: the timing of the overhaul, competition from other chains and from newer lodging alternatives like Airbnb. The Wyndham rebranding and facelift is a good move, but I’m not sure it will be enough for this hotel chain.