Oil prices can easily trump everything else in the market. So while it’s useful to look at the stock market or unemployment or a rising or falling dollar, it’s much more useful to pay close attention to what’s going on in the oil markets.

I’ve said it before, but there’s simply no market that’s larger or more important than oil, and you can verify this statement for yourself by making a list of goods and services you use that DON’T have an oil cost input.

Don’t bother trying – the list is short if not non-existent for most Westerners.

But if I asked you which country or countries really have control over oil prices, you might be tempted to answer “Saudi Arabia,” or at the very least, “OPEC.”

OPEC produces about 40% of the world’s oil, and the Saudis contribute about 12% to the total.

But the real story in world oil production isn’t in the Middle East. And surprisingly, it’s not even an OPEC member. Because while Saudi Arabia is still home to the most oil, it has more or less lost its ability to pump MORE oil today.

OPEC as a whole has the same problem. Oil production has peaked in OPEC. Some would say it’s in decline. Complicating the issue just a bit, OPEC claims to have more oil now than it did during the late ‘90s – when oil was at its cheapest. 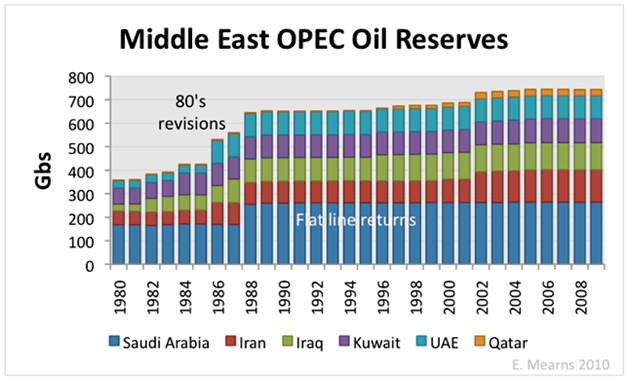 You don’t have to be an oil expert or a geologist to realize that OPEC is lying. How could it be possible, for instance, that Saudi Arabia has exactly the same amount of oil reserves in 2010 as it had in 1988?

Since 2002 at least, it’s pretty clear that OPEC and Saudi Arabia especially are full of beans when it comes to their official oil reserve estimates.

The real story in oil over the past decade or so is in Russia.

Russia has increased its output at a time when OPEC has been unable to break through production ceilings seen in 2008.

Since 2001, Russia increased their production by 50% from around 7 million barrels per day (MBPD) to an estimated 10.3 MBPD this year. Not too far behind is the United States, which produces around 9 MBPD.

I underscore this news not because it’s anything especially useful, necessarily, but because it’s exactly the kind of event that no one expected 5-10 years ago. The oil market is huge, yes, but it’s also dynamic, ever-changing and complicated.

In a strange twist, we might expect oil production in the United States to overtake both Saudi Arabia and Russia within the next 5-10 years – or maybe some other country will take the lead.

In any event, if you’re an oil investor, it pays to look for new opportunities, and not to assume that your prior knowledge and beliefs about the oil markets are still correct.