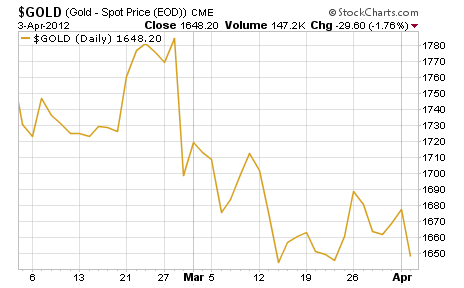 Even Treasury prices have fallen: 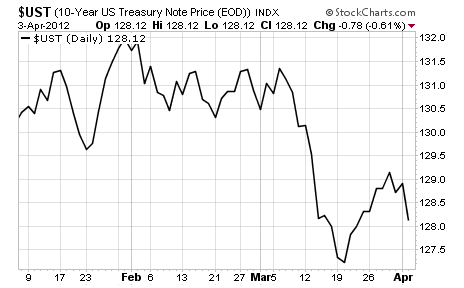 At first blush, it appears that everyone is selling nearly everything – but that perception is something of an illusion.

The simplest answer is that a little bit of dollar strength is clawing back some gains. The US dollar index is up about 2% since late March, which is a pretty significant move.

And since November, the dollar index is up nearly 10% – which is a huge move.

Think of the US dollar index as a short term indicator about the relative strength of the dollar rated against other currencies. As other currencies get weak relative to the dollar, that price action tends to be bearish for dollar denominated assets.

But as I said, it’s a short term indicator. After all, the dollar index is just a metric comparing the relative buying power of the dollar vs. a basket of other currencies – none of which are backed by anything. The biggest component of the dollar index is the Euro at nearly 60% of the index. And as we all know, the Euro is practically in tatters – even compared to the dollar.

And in real terms – regardless of what happens to the Euro or the dollar – right now your dollars can buy more gold than they could a month ago. That’s good news.

As I wrote back in late March – lower priced gold is something we should be rooting for over the intermediate term:

"…we should hope for lower gold prices.

There’s a commonly held belief that in order for prices to go higher, they must go higher soon. Or that they must reach certain thresholds before reaching the next higher price. I call this belief the `ladder myth.’

In fact, we should hope and seek out lower prices to build our positions.

.So we should hope for prices lower than what they are today. And then we should have the conviction to buy if/when those prices come."

Today, gold prices are lower. Will you have the conviction to add to your position?

I hope you will.