That's not bad, and it was the 11th straight year in the black for gold.

But another asset surprisingly outpaced gold by nearly double last year. And it's one of the most universally hated investments – at least for commodity investors.

I'm talking about the 30 Year US Treasury Bond. Yes – bonds can appreciate in price, just like stocks or commodities. And last year, the 30 year Treasury was up nearly 20%. 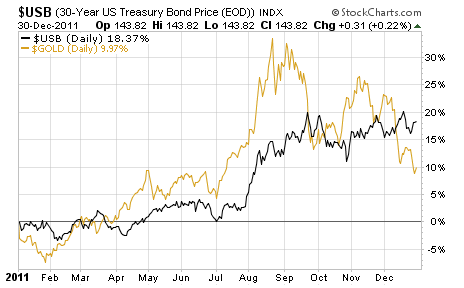 Now, though I'm a commodity investor, I pay a great deal of attention to bonds, and specifically, I pay attention to the 30 year Treasury bond. It's arguably the single most important data point out there. This bond is a benchmark for everything from mortgage rates, interbank lending, corporate bonds, money market accounts and financing of all types.

And the bond market dwarfs the gold market.

At today's gold prices, the annual demand for gold is about $210 billion. But the total amount of Treasuries issued comes to over $7 trillion. For further comparison, quarterly Treasury issuances typically top $300 billion. So, more Treasuries are consumed every 3 months than gold is consumed in a year.

The Treasury market is important, and it's long been seen by the mainstream investment public that Treasuries are the safest investment in the world. Now, I don't know about you, but when I see a "safe" investment return nearly 20% in one year, I'm intrigued. Safe investments don't return 20%.

So either this safe investment has broken all the rules, or it's not safe. I remember when I first got investing and I asked my cousin Bill, a banker, if I should buy Icelandic bonds at a 9% yield. He said, "If it looks like a junk bond, and it acts like a junk bond and it yields a junk bond yield, it's probably a junk bond."

Right now the 30 year US Treasury is acting like a junk bond.

And this difference in the performance between gold and Treasuries speaks volumes about where we are in this stage of the commodity bull market. We're about to enter a stage of this bull market that's typically the most profitable. I expect gold to outperform Treasuries this year, along with nearly every other commodity.

Treasuries are going to rise in yield and plummet in price, and when it happens it will happen quickly.

Keep averaging into your gold positions – as I am.