Everyone knows that the government fudges its inflation statistics.

The benefit is clear: the government understates inflation and is able to keep social security, Medicare and other inflation sensitive costs down. It also can then claim that its clearly inflationary policies are not resulting in inflation.

But, as with everything else the government does, the unintended consequences of their inflation fudging are beginning to show up.

And the results are far more catastrophic than the initial pain the government sought to avoid.

Allow me to demonstrate how monkeying with inflation numbers might result in disastrous consequences with a simple metaphor.

A standard ruler is 12 inches, and the USA Corporation has a long history of making the best and most accurate rulers.

But over the past 40 years, the accuracy of the ruler has started to come into question – and the tendency for the ruler to incorrectly measure a foot has only accelerated and worsened.

Today, no one knows how accurate or inaccurate the USA Corp’s rulers really are. The company says that the ruler is as good as ever, but when you start trying to measure something, you realize that it’s completely wrong. All of a sudden a standard ballpoint pen is 2 feet long, or a beer bottle is 1 inch high. USA Corp’s rulers are ineffective as measuring devices.

So of late, people are beginning to distrust the rulers, and are trading them in for other rulers they know to be more trustworthy, like the Swiss ruler or the gold ruler.

When you change the length of the ruler, it makes people unsure. It doesn’t necessarily mean that there’s huge ruler inflation or deflation. It’s much worse than that. Because a lack of trust in your rulers means that they will cease to be useful as rulers.

And to extend the metaphor, when you lie to people about inflation, they begin to feel unsure about your currency. They don’t know which way is up with dollars, so they trade them in for other currencies, and eventually they stop using dollars altogether.

That’s a currency crisis. And it’s almost always the result of outright deceit on the part of central bankers. Central bankers understate the true results of their policies, and people lose trust in the currency.

Typically, Central Bankers try to paper over shortcomings with more rulers – or dollars – and then continue to lie about inflation. But while inflation is disastrous for most people, it’s the lack of trust that really puts the nails in the coffin for currencies.

That’s why people are flocking to gold – even as it makes new price records every month.

That’s why people are buying the Swiss Franc – even as it trades at record valuations against the dollar.

People don’t know what the dollar is anymore – all because the brainiacs in the Federal Reserve and the US Treasury don’t have the political will or stones to be up front about the real inflation story going on.

Shadowstats claims that inflation is over 10% – which is more than double the official rate. 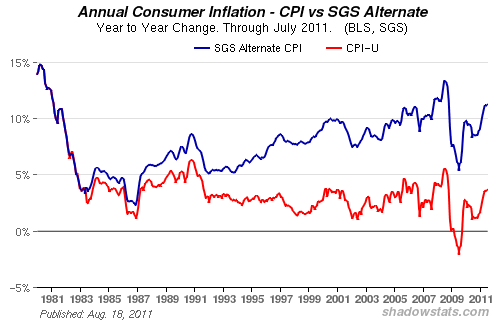 MIT’s "billion prices project" shows that inflation is over 4% per year. 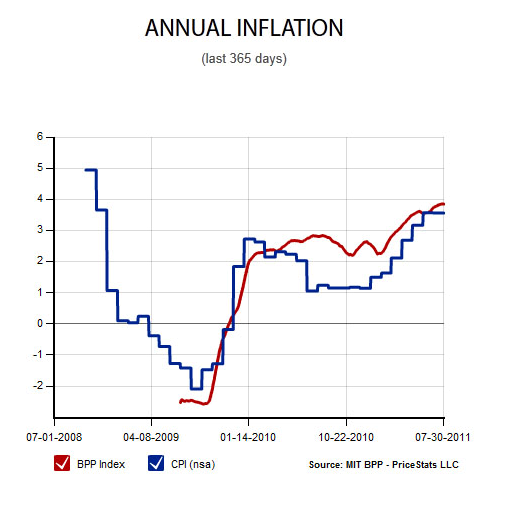 Which one is right? I don’t know. It’s almost impossible to know. But what’s clear is that kind of uncertainty tends to be bullish for real goods, and real honest money like gold and silver.

Here’s to knowing when we’re being lied to.