We know the government lies to us about inflation. In fact, investors take this lie as just another cost of doing business as a willing participant in the world’s greatest economy.

But I’m willing to bet that most people simply have no idea about how long we’ve been lied to.

And since I try to keep these Friday editions of the Resource Prospector a little more entertaining or amusing, I thought I’d share a War Advertising Council ad from the WW2 era. 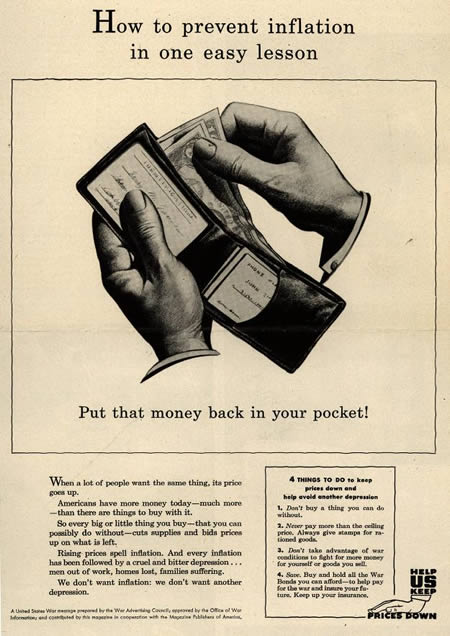 I realize the text may be somewhat difficult to read, so I’ve transcribed it below:

"When a lot of people want the same thing, its price goes up. Americans have more money today – much more – than there are things to buy with it.

So ever big or little thing you buy – that you possibly do without – cuts supplies and bids prices up on what is left.

Rising prices spell inflation. And every inflation has been followed by a cruel and bitter depression. men out of work, homes lost, families suffering.


4 Things to do to keep prices down to prevent another depression:

If you’ve been reading this letter for very long, I hope you were able to catch the immediate problem in the first paragraph:

"Americans have more money today – much more – than there are things to buy with it."

Here’s the real cause – and the actual definition of inflation. It’s literally when there’s an increase in money supply, which results in more money chasing the same amount of goods. But who’s to blame for this excess money? If you answered the Federal Reserve and the U.S. Treasury, then you’re right.

So the US Government prints up too much money – and then tries to tell people not to spend it in order to combat inflation.

It’s like dumping a bucket of gasoline on someone and then telling them not to be so flammable.

Today of course, we’re being told a variety of different lies. We’re told by President Obama to go out and spend! Saving money is almost explicitly forbidden by the inflationary policies of our central bank. Savers are getting slaughtered by Ben Bernanke and his magical money computer with Obama’s tacit approval.

Obama should be telling people the truth: you should be saving your money, because the US Government is broke, and will soon be practically constrained from bailing anyone out, even itself. He should modify that old saying about the government to say, "I’m from the government, and I really can’t help."

Today, our economy simply can’t function without consumer growth. You’ve heard it over and over again – about how the American economy is 70% based on consumer spending.

But who in their right minds actually believes that you can consume your way out of recession? Does that make sense to anyone?

We’re going to see some very scary "corrections" throughout the economy as these ridiculous imbalances work themselves out. We’ll find out the hard way that the Keynesians are wrong, that you can’t borrow, spend, or consume your way out of debt, recession or unemployment.

We’ll all confirm our suspicions that the Government has been lying to us about its ability to sustain its spending habits without destroying the currency.

And we’ll be vilified as "speculators" and "greedy capitalists" for buying gold, silver, oil, coal and other commodities by anyone who is foolish enough to believe that the government will take care of them.

But if you’ve been prudently following my advice, you’re already vindicated. You’re already ahead of the game. The commodity bull market is still intact, and it’s going to remain intact until world central bankers reform themselves or die.

Have a great Labor Day weekend!