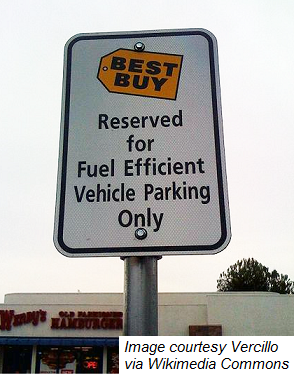 Fuel efficiency is a good thing, right? I don’t see why
not.

But the prevailing myth is that fuel efficiency results in the use of LESS fuel.

According to economist Jeff Rubin, greater fuel efficiency has not changed the
amount of fuel Americans consume by one drop.

"Your average vehicle on the road in America consumes just as much gasoline
today as it did three decades ago when its engine was 30 percent less efficient
than the engine in your car today," Rubin says in his excellent book "Why Your World is About to Get a Whole Lot Smaller."

How did this happen?

Rubin calls this phenomenon the "rebound effect," and it’s not just relegated to
fuel efficiency.

Greater efficiency in just about any system typically results in more output for
the energy, time or resources invested.

Instead of shrinking resource usage, we increase output. Output rebounds.


I don’t know if you can call this phenomenon a good thing or a bad thing. It’s
just a fact of economics. It’s been proven time and time again.

Technological advances tend to maximize production at the expense of foregoing
the contraction of resources.

Moreover, fuel efficiency advances make vehicles cheaper to manufacture – which
induces more drivers in Asia and other parts of the developing world to enter
the oil marketplace. How many more cars do you think the current amount of
waning oil supply will support?

The end result, of course, is the opposite of what’s intended for lawfully
mandated fuel efficiency. Politicians really wish to constrain fuel usage when
they pass efficiency laws and quotas. But because they don’t understand even the
most basic tenets of economics, let alone an esoteric theorem like the "rebound
effect," they fail utterly in their goal.

The only real way we’re going to use less fuel will have to be through sustained
higher prices. At some point, efficiency advances won’t be able to keep pace,
and we’ll be forced to pay much more for gas at the pump even if our cars get
100 miles to the gallon.

Then, and only then, will our consumption of oil begin to wane.

But don’t make the mistake of believing that fuel efficiency is even a good
thing for Americans – because as I noted, fuel efficiency creates more cars on
the road. And I don’t know about you, but I don’t want to get in a bidding war
with 1 billion Asians for every gallon of oil – especially when they’re likely
to be driving mo-peds and other high-efficiency vehicles, while I’m filling up
my 4 door passenger car.

The point is, there’s really no way the world will use less oil until prices
begin to rise. Oil isn’t going out of style either, not with the developing
world just beginning to rev its engines.

Keep averaging into your oil investments.