If you're looking for yet another reason to own physical gold, look no further than the unbelievable situation that continues to unravel with the MF Global debacle.

The details are somewhat complicated, but in essence, MF Global, under the stewardship of John Corzine, made huge leveraged bets on risky European bonds, and lost their shirts. They owed their counterparties hundreds of millions of dollars they didn't have – so they basically stole the difference from their clients.

You might remember John Corzine as the former Senator and Governor of New Jersey, who famously bought his Senate and Governor seats with millions of dollars he made while at Goldman Sachs (NYSE: GS).

Here's a picture of him if you need a reminder of what the man looks like: 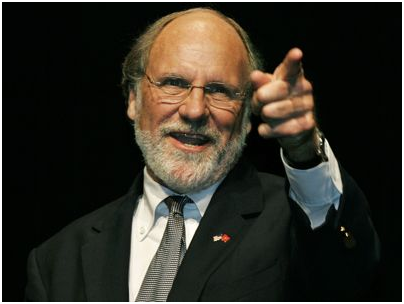 You might be thinking that client money is supposed to stay behind a firewall and shouldn't be used to settle the debts of the agency.

And you're right. But the government and the stewards of MF Global's bankruptcy think differently, especially because too-big-to-fail bank JP Morgan (NYSE: JPM) was one of MF Global's counterparties that needed to be made whole after MF Global's risky bets went bad.

In essence, this entire episode is a microcosm of the SAME situation that happened a few years ago with bad mortgage securities that would have bankrupted most if not all of the too-big-to-fail banks on Wall Street.

And that's yet another reason you should own physical gold – because we can't even trust money in the bank anymore. It's up for grabs. The Federal Government will always side with big Wall Street banks over you and me.

Moreover, these banks know they have that tacit backing. They know they can essentially break the law and get away with it if they need to do so in order to keep themselves solvent. And these banks' solvencies will continue to be tested, because what's the downside? There isn't one! They can continually make leveraged bets and then put the U.S. taxpayer and the Federal Reserve Note on the hook to bail them out.

And it's not even a conspiracy. All of the major players in world finance are mixed up with central bankers.

These banks are inextricably linked with the Federal Reserve and the U.S. Treasury as "dealer-banks."

"Primary dealers serve as trading counterparties of the New York Fed in its implementation of monetary policy. This role includes the obligations to: (i) participate consistently in open market operations to carry out U.S. monetary policy pursuant to the direction of the Federal Open Market Committee (FOMC); and (ii) provide the New York Fed's trading desk with market information and analysis helpful in the formulation and implementation of monetary policy. Primary dealers are also required to participate in all auctions of U.S. government debt and to make reasonable markets for the New York Fed when it transacts on behalf of its foreign official account-holders."

So, these dealer banks are close partners with the government in enacting monetary policy. Of course the Fed backs them over you and me. Of course the U.S. Justice Department turns a blind eye. Of course the Treasury is at the beck and call of the CEOs at these firms.

They're all in bed together.

So, if you have an account with any of the following "dealer" banks, I would cancel it. Not just out of protest, but out of self preservation!

I'd also continue to deleverage yourself from the U.S. dollar as much as you can. Open up a foreign bank account. Buy physical gold and silver. Buy foreign bonds and stocks.

Send a strong message to our government and its banker buddies that we're not the unwitting milking cows that they take us for.