When you’re in the funhouse, you have to continually remind yourself that nothing is real. The hall of mirrors is not the place to run full speed – even if it looks like your path is clear.

The entire purpose of these fantasy lands is to alter your perspective – to make you believe the unbelievable, if only for one minute.

And that’s where we are today. We’re in the funhouse. We’re walking through the hall of mirrors.

We’re still in the midst of a secular bear market in stocks.

Yes, stocks have rallied significantly in the first month of the year – but a one month rally is the hallmark of a bear market.

Where do you think we are right now?

Take a look at this ridiculous chart of the Nasdaq: 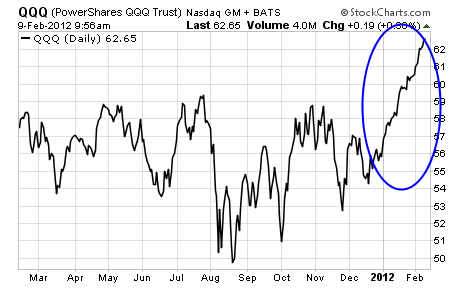 For the past month, the Nasdaq has done nothing but shoot higher and higher.

You don’t need to look too far into the past to see what happens to folks who get stuck in the bear trap. Look at the run up between June and the end of July of last year. Stocks rallied 10% in about a month.

Then in August, the market gave back 10% and then some.

In a bear market, the expected rate of return is zero or negative. So we should be especially leery of any asset class that shows signs of massive one month returns without a single significant pullback.

That’s why I tell everyone I know to buy physical gold and silver. My expected rate of return on my gold and silver holdings is zero in real terms. Gold is not an investment.

I only hope to protect that portion of my wealth. Yes, I may "profit" in dollar terms – but the dollar is an abstraction, summoned into existence by central bankers and politicians. They decide what the dollar is worth.

But they can’t decide what an ounce of gold is worth.

What makes gold so special? Well, it’s beyond the power of politicians to manipulate, and far removed from the printing presses of the Federal Reserve. There’s also a pretty static supply of gold in the world. Almost all of the gold ever mined is still readily available. And while some small part of that supply is destroyed in industrial uses each year, a slightly higher amount is brought into the market annually.

I repeat my assertion about gold: it’s not an investment.

For an investment, I recommend taking a look at gold and silver miners. They’re a great exception to the rule of "no return."

I recently added a small silver miner to the portfolio of my brand new $5 research service: Resource Prospector Pro.

Companies in the gold and silver mining sector have not rallied nearly as much as the broad market. They’re also lagging the price movement of physical gold and silver.

The time is now.