One certainly can’t complain about the S&P 500 Index’s 28% in 2013. But it’s still hard not to wish for greater exposure to small caps over the past year.
After all, the Russell 2000 Small Cap Index is up by an even more impressive 35%. That 7% difference is likely the result of faster underlying growth by smaller companies. According to a recent note from Bank of America Merrill Lynch, small-cap profits were on track to rise 14% in the third quarter. That would mark the fastest growth of the asset class since the second quarter of 2011.
This rapid growth has propelled many mutual funds with a healthy allocation to small companies even higher than the Russell 2000. This past weekend, curiosity got the better of me so I dug into Morningstar’s screening tools to see exactly which funds performed the best.
Because I love the smallest of the small, I screened for small funds – those with less than $500 million in assets under management. I felt this is a more interesting screen than just looking at small-cap funds since the screen kicks back many more under-the-radar funds.
I only included U.S. funds that had an expense ratio lower than 1%, that had fund manager tenure of longer than five years and which had a minimum initial purchase of $10,000 or less.
This screen kicked back 53 funds. And not surprisingly, these are not-so-familiar, highly specialized fund names. The chart below shows the year-to-date returns of the 10 best-performing small funds. 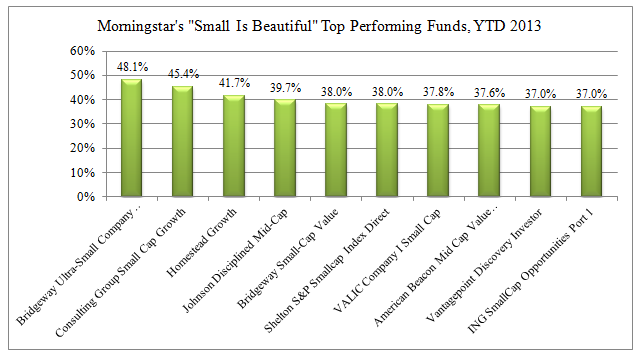 Bridgeway Ultra-Small Company Market (BRSIX)
With a 48.1% return year-to-date, there’s really nothing bad to say about the Bridgeway Ultra-Small Company Fund. It holds the smallest of the small companies in the New York Stock Exchange. With the fund’s average holding having a market cap of just $156 million, this is one of the rare micro-cap funds out there that hasn’t evolved into a small-cap fund. Accordingly, it’s clearly only for those who want tiny companies in their portfolios.
The fund holds around 600 stocks and rarely do any make up more than 1% of the fund. It is led by Bridgeway Funds’ founder John Montgomery, who has a background in statistics and mass-transit management. There is a strong quantitative approach to managing the fund. Interestingly, not one manager has left the fund over the past five years.
Given that BRSIX has outperformed 85% of its peers and posted another banner year in 2013, this true micro-cap fund is worth a look. And if the fund itself isn’t right for you, I expect there are many interesting companies within it that might be of interest.
Consulting Group Small Cap Growth (TSGUX)
Consulting Group’s Small Cap Growth fund is another under-the-radar performer, rising 45.4% YTD. And like the BRSIX, its management has been extremely stable – most managers have been with the fund for almost a decade.
Turnover in the TSGUX is relatively high at 90%. However despite that fact, it still has a very low expense ratio of just 0.97%. It’s is also very accessible to new investors given that the minimum investment is only $100.
The TSGUX’s average holding is larger than the BRSIX. While 26% of the portfolio consists of micro-caps, 46% are small caps and 28% are mid caps. As a result the average market cap in the fund is $1.56 billion. Its largest exposure is to industrials (22%), technology (20%), healthcare (18%) and consumer cyclical (18%).
The TSGUX is an interesting looking fund. I have to admit though that I’m more compelled by the BRSIX given its greater allocation to micro-caps.
Homestead Growth (HNASX)
Homestead’s Growth fund is incredibly small. It has just $74 million under management. But what makes this fund extremely interesting is that its holdings are large growth companies like Google (NASDAQ:GOOG), Amazon.com (NASDAQ:AMZN) and Gilead Sciences (NASDAQ:GILD) (remember my screen is for small funds, not small-cap funds).
That HNASX has achieved a 41.7% return YTD with large growth companies is impressive. Equally compelling is that it has outperformed the S&P 500 over the last one-year, three-, five- and 10-year periods.
One has to wonder why this fund is so small, especially given that the minimum investment is only $500. It is managed by RE Advisors Corp. and sub-advised by T. Rowe Price Associates, so it’s not as though it doesn’t have resources behind it.
HNASX’s performance alone is worth further research. But I’m out of room for today so we’ll have to save that discussion for another day. The ultimate question is, of course, can these funds continue to outperform in 2014?  No amount of research can answer that one – only time will tell.

Do you know when your next dividend stock pays out? Do you know when the dividend stock you want to buy more of pays out – and how much? We’ve put together a simple calendar that highlights many of the market’s best dividends into one easy to scan document. Read it once, and you’ll see how to set up a 12 month dividend stream to ensure income all year long. Click here to see the full details of the Dividend Calendar.