Yesterday, a Euro Central Bank official was credited with sparking a rally when he said that the European debt crisis should be resolved in a year or two. That’s a pretty flimsy reason for a rally, if you ask me. I suppose it’s a little comforting to get a timeline. But the thought of having to be constantly bombarded with news from Greece and Italy for another two years is not something I look forward to. And while I’m on the subject, I have a hard time understanding why Italian Prime Minister Silvio Berlusconi is so desperate to stay in office. If I were him, I’d be happy to leave. 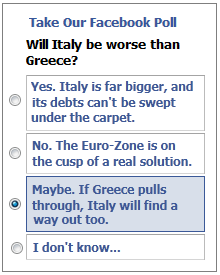 Ten-year yields hit 6.7 percent for Italian bonds. That’s not as bad as Greece, but it’s not good. Italy can’t borrow at that rate. Investors aren’t talking default yet, and new leadership in Italy might be very good for expectations. But it’s pretty clear investors don’t trust Berlusconi.

In any event, yesterday’s rally out of the hole took the S&P 500 back above support/resistance at 1,250. Volume was very light, but the market is behaving well. It was important for stocks to back off a little and test support after the Euro debt deal rally. So holding 1,250 has to be seen as bullish. Earnings season was solid once again. Earnings growth may have slowed a bit, but that’s to be expected. It’s not possible to maintain the pace earnings were on. Simply showing growth when demand is slack is a testament to corporate management. And as I’ve said, the gains in productivity suggest that hiring may pick up soon.

Stocks are poised to rally again today. Investors seem willing to ignore Europe and focus on valuations and economic growth. A small-business confidence survey out this morning showed its best reading since June. That’s helping the bullish sentiment. And the continuing strength in oil prices is a sign that growth expectations remain solid.

I’ve talked at length about why oil is such a good indicator for the stock market. Even yesterday, when stocks were down, oil prices were rallying. That was probably a better reason for the reversal in the market than any news coming out of Europe. Oil is now just $4 away from the $100 level. While I know that no one wants to pay more for gasoline, it would be bullish for oil to rise above $100. However, I would expect a pause in the oil rally before $100 is crested.

Gold has also been strong ever since the Fed meeting last week. Investors seem to think that Fed Chief Ben Bernanke has set the table for QE3. And we have already seen what Fed stimulus does for gold prices. I remain skeptical about QE3, but not gold. I’m not sure I’d jump in immediately, with prices pushing $1,800 an ounce, but the outlook remains positive for gold. At this point, interest rates are probably the biggest catalyst for gold, and we may not see a rate hike until 2013.

The classic definition of inflation describes a situation where prices rise because too much money is chasing too few goods. We’d be hard pressed to say today’s situation resembles the classic definition of inflation. The Fed has attempted to increase the money supply, but the truth is, only jobs can put money in people’s pockets. Fed policy helps banks and borrowers. But the Fed can’t create jobs and can’t create demand.

Fed policy is supposed to create the conditions where both demand and jobs can increase. But our economic problems are mostly debt related, and credit doesn’t fix debt — especially if you don’t have a job.

Write me any time: [email protected]