We’ve witnessed an incredible move in the S&P 500 (SPY) over the past few weeks. 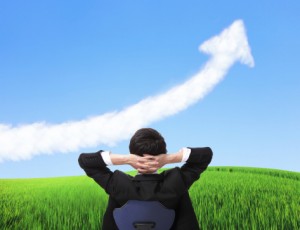 The image above shows the options chain for SPY at the close on March 24, the day before the market’s recent surge. The highlighted area in blue shows the April 416 strike. More specifically, it shows the Prob. Of Touch, or the probability that SPY would reach $416 by April 16.

We can also see the short-term extreme using my favorite mean-reversion indicator: RSI.

RSI, or relative strength index, was developed by technical analyst J. Welles Wilder Jr. It’s an overbought/oversold oscillator that compares the performance of an equity – in our case a highly liquid ETF – to itself over a period of time. It should not be confused with the term “relative strength,” which is the comparison of one entity’s performance to another.

Basically, the relative strength index allows us to gauge the probability of a short- to intermediate-term reversal. It does not tell us the exact entry or exit point, but it helps us to be aware that a reversal is on the horizon. 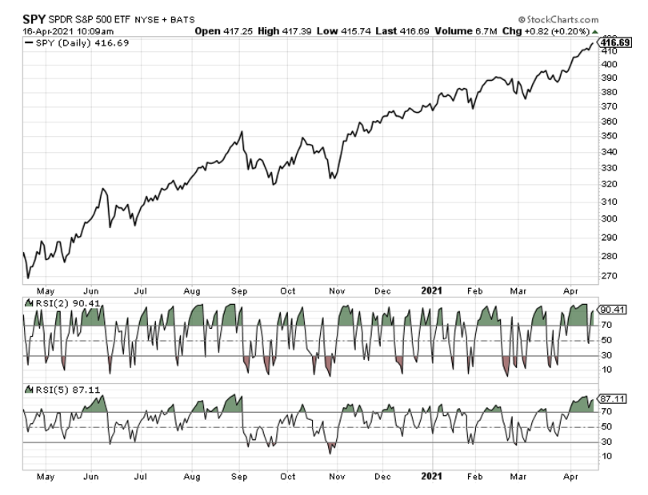 As an options trader, I love the aforementioned scenario.

Extreme, short-term, overbought readings – like what we are currently witnessing in SPY and many of the major indexes – oftentimes lead to a reversion to the mean over the short term.

“Reversion to the mean” simply means that there is a greater chance of a short-term reprieve or “fade” in the price of the underlying stock. I like to think of it as the perfect opportunity to sell premium.

So, given all the information stated so far, I’m obviously bearish, at least over the very short term in SPY. I expect to see sideways-to-lower price action over the short term. But, I want to increase the odds of my bearish stance, by using an options strategy that allows me to have a margin of error just in case the short-term extremes continue.

In this case, a bear call spread – or vertical call spread – is the strategy of choice. It’s probably one of the most used strategies in my arsenal of options selling tools for a variety of reasons. Here are a few:

A bear call is a composed of a short (sold) call at a lower strike price and a long (bought) call at a higher strike price. The nature of call pricing tells us that the higher-strike purchased call will cost less than the money collected from the lower-strike sold call. That’s why this bear call spread involves a cash inflow, or credit.

The ideal outcome is for the underlying stock price to stay below the strike price of the sold call through option expiration. In this scenario, the spread expires worthless, allowing me to keep the premium collected upfront.

In this example, SPY is currently trading for $416.69 and is in an extreme overbought state.

For example’s sake, I’ll choose the May expiration cycle with 35 days left until expiration.

Once I decide which expiration cycle to use, I go straight to the probabilities.

Realistically, it’s going to be slightly less, because I prefer to buy the spread back before expiration to lock in profits, take off risk and afford myself the opportunity to sell more premium.

Bear call spreads are not new to the world of investing. Unfortunately, not enough investors are aware of this sound options strategy which provides reasonable returns when the market is overheated and due for a reprieve.