CNN and CNBC report that Musk is raising cash to fund the $44 billion purchase of Twitter (NASDAQ: TWTR).

It’s not Musk’s first sale of stock to fund the Twitter deal. Back in April he also sold $8.5 billion of Tesla stock after announcing plans to buy Twitter.

That means he’s sold a total of $15.4 billion in Tesla stock.

Right now, Elon is trying to wrangle out of his agreement to buy Twitter.

There are two important things to consider:

It’s quite possible that the court will rule in favor of Twitter. Under that scenario, Musk would likely pay a $1 billion penalty for not closing the deal. It’s uncertain what will happen beyond that.

Musk says he’s raising cash to buy Twitter. Even though it appears that he can NOT be forced to close the transaction and purchase Twitter – if he now has buyer’s remorse. 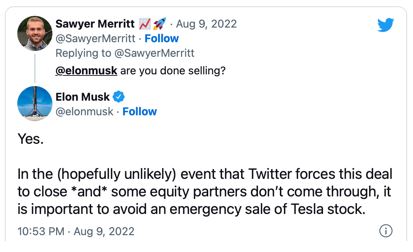 Elon Musk owns 17% of Tesla – making him the largest shareholder. He’s also the largest investor in Twitter with a 9% stake.

The entire fight over Twitter is a bit of a joke.

Tesla’s founder is just days away from revealing his CONFIDENTIAL Master Plan 3.0. You could’ve earned 1,766% – 24,017% profits investing after he released Master Plan Part 1 & 2. Now it’s time for you to BUY these 5 stocks – before Elon reveals everything. Click here for details.

It’s a complete sideshow to what’s really happening at Tesla and SpaceX.

That’s because Elon is just days away from releasing his Master Plan 3.0. And this new master plan will reveal Musk’s strategic vision for the next decade.

In fact, I’d bet that Elon plans to use the $15 billion in cash to fund his Master Plan 3.0. And he really has NO intention of using the cash to buy Twitter.

Elon Musk hasn’t released the OFFICIAL Master Plan on the Tesla blog – or anywhere else.

I’ve personally invested over 200 hours of my time on this research project. I’ve put the puzzle pieces together to develop a clear picture and bold prediction of what’s next for Elon Musk… Tesla… and SpaceX.

Most importantly, you’ll discover urgent details on the best stocks to BUY NOW. And it’s critical that you act now – BEFORE the news gets out.