With the events in Boston a week ago and the continued tension between North and South Korea, it’s important to understand how a terrorist attack affects stocks, and specifically which sectors it dings the hardest. Though each attack is different, they significantly affect certain sectors, while other parts of the market prove to be impervious and react to a much lesser degree.

Terrorist attacks are becoming more common. Small bombings seem to occur with frequency, while larger-scaled attacks – such as New York (2001), Spain (2004) and London (2005) – occur less often. All attacks disrupt normal life. They create a sense of havoc, destroy infrastructure and most significantly they cause a loss of human life.

With the help of several different research reports, I’ll share with you those industries and sectors most reactive to terrorist attacks. However, the only consistent reaction seen among those research reports is a rise in instability, which causes the CBOE Volatility Index (VIX) to increase. In fact, we saw just that last Monday when the VIX vaulted 43% to 17.07.

In addition to the VIX, Chen and Siems found that equities react negatively to terrorist attacks, concluding that 94% of their samples had negative returns directly corresponding to the event. However, they also found that U.S. stocks recover faster than foreign ones, believing that the abundant liquidity helps smooth emotions.

A research report by Lyroudi and Kalivis focusing on the 1995 Oklahoma City bombing concluded that the aerospace, airfreight, oil and retail industries had a smaller negative response on average on the event day. Conversely, airlines, insurance and transportation stocks had abnormal negative returns, with airlines being the biggest loser.

The results are somewhat surprising – especially the responses from retail and airfreight – since it goes against traditional beliefs that consumers will be reluctant to make new purchases. The negative response from airline stocks should not surprise readers.

This report also looked at the impact on those same industries two weeks after the event. Transportation, airfreight and retailing exhibited the largest abnormal declines during that period.

This is an especially exciting revelation because transportation stocks have been some of the top performers this year thanks to the boom in shale oil production from regions in the Bakken and Marcellus formation. So a two-week pullback gives you the chance to buy great companies at bargain prices. In fact, we’re doing just that in my stock service – Top Stock Insights. Click here for more information on our latest hot research and stock recommendations.

An IMF report compiled by Johnston and Nedelescu (using data from the Chen and Siems research) showed the impact the twin towers attack in New York had on global indices. Though all indices traded lower following this event, the rebound was shorter for more developed economies. The U.S. fully recovered within 13 days while Tokyo took only six days to recoup event-day losses. 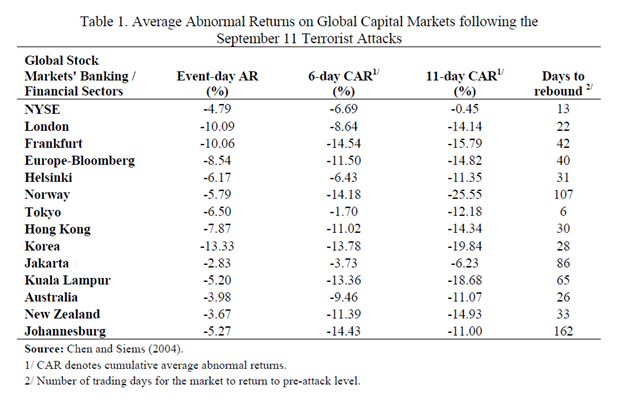 Will the reaction to Boston be the same or could this time be different?

However, there is no surefire bet as to what industries will drop or pop. Moreover, these abnormal declines may last anywhere from two days to a few months, making the timing of bearish trades challenging.

More often than not, attack-driven declines have offered buyable dips. However, central banks have often flooded the economy with liquidity in response to past events. Since central banks are already doing that now, the reaction to the latest attack may prove different, and declines may last longer. Additionally, the indices have roared higher to start the year, and deserve a pullback.

Contrary to prior research, the airlines recovered the next day and proceeded to rally to a five-day high. Retail hasn’t fully recovered, but it recovered well the next day, too.

To bring us full circle, attacks are generally bearish for stocks. And that’s been no different this time around. However, equities always recover eventually, with stocks in developed economies such as the U.S., Japan and Germany tending to rebound more quickly. Though this decline may persist for another week or two, investors should be more eager to buy than to sell. I’d recommend looking for stocks in the transportation sector first since many of them are great companies and these stocks tend to have abnormal negative reactions lasting about two weeks before rebounding.