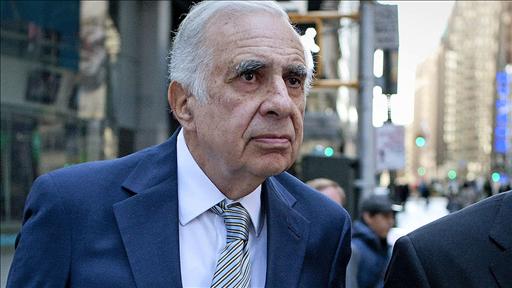 Billionaire Carl Icahn is the latest to grow wary of the market. During a Reuters last week, Icahn said “in my mind, it is time to be cautious about the U.S. stock markets.”

But he’s not the first, famed investors Jim Rogers and Doug Kass have been calling the market overvalued since May. However, the market has trekked higher — with the S&P 500 up 7% over the last three months.

Icahn does note that he’s having a great year, but he’s being very selective about the companies he purchases.

In an effort to keep investors from missing out on what appears to be a stubborn rally — where despite the media’s yearning for a pullback, stock’s continue higher — let’s see what Icahn is buying.

Here are the 3 Carl Icahn holdings the billionaire is buying in an overvalued market:

No. 1 Stock That Icahn Is Buying: Apple (NASDAQ: AAPL)

Icahn increased his stake in Apple by 59% during the first quarter, making it one of his largest holdings. Icahn got involved with Apple last year, pushing the tech giant to put its cash hoard to work for investors — namely in the form of buybacks.

Icahn prodded for six months before backing down in February. But he did note that he was somewhat victorious at Apple, pointing to Apple’s steady increase in its buyback program.

Back in April, Apple announced a 7-for-1 stock split, which made the stock more accessible to retail investors. It also increased its plan to return capital to shareholders to $130 billion by 2015, versus the previous $100 billion. This all came as the tech giant posted earnings for the quarter of $11.62 a share, beating expectations of $10.18 a share.

As of last quarter, Apple boosted its dividend payment by 8 percent. It now offers a near 2% dividend yield and its P/E ratio is under 16. Apple also has one of the best returns on investment in the industry, standing at 25% for the trailing twelve months.

Driving the company forward should be the product refresh, which will include an iPhone 6 and other products that will be released later this year. As well, it is working on integrating its Beats acquisition, which should make the company a larger player in the streaming music business. Then there’s the rumored smartwatch – iWatch – which could also be released this fall.

No. 2 Stock That Icahn Is Buying: Family Dollar (NYSE: FDO)

Family Dollar is one of Icahn’s newest holdings. The billionaire bought up 10.69 million shares earlier this month, putting him as a 9% owner of the dollar store. He’s pushing the company to sell itself, potentially to top competitor Dollar General. He notes that with rising competition, Family Dollar could really use a partner.

Shares are down 8% over the last month, thanks to releasing weak May-quarter results. Earnings came in at $0.85, missing $0.89 expectations, and below the $1.05 from the same quarter last year. Its CEO, Howard Levine, believes that “”the low-end consumer has not benefited from this recovery at all, in fact, I think have slipped further back.”

Icahn doesn’t agree, believing that the biggest problem is within the company. He notes that “leadership, to say the least, is questionable at Family Dollar and it’s been that way for many years.” However, Family Dollar still thinks it has an opportunity to get more customers in its stores. Its latest initiative is to accelerate the rollout of beer and wine to its stores.

Family Dollar trades at a P/E ratio of 18.2 based on next year’s earnings estimates. That’s well above major peers, Dollar General and Dollar Tree. On the plus side, Family Dollar has the lowest debt to equity ratio of the three. It’s also the only one offering a dividend yield — currently yielding 2%.

No. 3 Stock That Icahn Is Buying: eBay (NASDAQ: EBAY)

This ecommerce company was a new position for Icahn during the first quarter. He bought up 27.8 million shares during the quarter, good enough for 2.2% of the company. eBay is one of the largest e-commerce websites in the world and it also owns the online payment business, PayPal.

Regardless, eBay still has notable growth opportunities, which includes expanding the PayPal business and is finding new ways to attract visitors to its marketplace/auction site.

PayPal is expanding its presence in more emerging countries, including those in Latin America and sub-Saharan Africa. There are big opportunities for payments in these underbanked areas. Meanwhile, eBay recently partnered with Sotheby’s to allow online bidding for various art and high-end items.

Ichan is one of the great minds on Wall Street. Being 78 years old, he’s been through enough market ups-and-down to know when it’s time to be cautious. But despite his cautious views, the three stocks above are a few names that he’s been buying over the past couple of quarters.

There’s never been a more forthright or upstanding investor than Warren Buffett, but even he hates taxes. That’s why the Berkshire Hathaway CEO keeps his personal fortune (over $600 million) in an offshore account… on an island paradise that offers the best retirement benefits. Here, the government doesn’t tax dividends or even capital gains. The result is, investors with money here earn more on average than investing in the U.S. alone. Best of all, this billionaire’s secret retirement haven is now OPEN to individual investors. You can join Warren Buffett today… right through your brokerage account – without ever leaving home.Click here to find out how.