We’ve heard it before: “America has too much debt.” This has been the common theme since Obama took over in 2009, and the sentiment persisted through the 2012 election. It continues to exist today.

However, people spouting off about debt may not know both sides of the story. The idea about having too much debt could be flawed because a high debt balance isn’t always a bad thing.

I was pleased to read a report from Capital Economics titled, “America is Not Drowning in Debt,” which debunks many of the hyped myths circulating about America’s “crushing” debt balance.

The first chart from their report shows the current debt balance (private, financial, government, etc.) as a percent of GDP. At first glance, it looks frightening. Not only is the debt-to-GDP ratio greater than 350%, it’s also well above historical ratios. 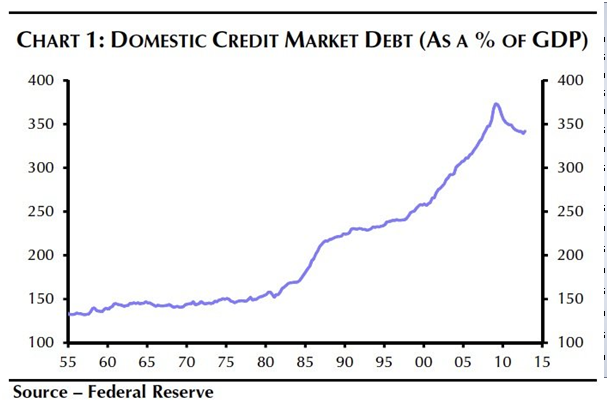 After looking at only the chart above, you’d be right to think that America is in trouble. GDP is equivalent to income. So the U.S. owes more than three times as much as the country earns each year. If GDP were to decline – as it nearly did in the fourth quarter of 2012 – that ratio worsens.

We’re taking on more debt, and that’s not causing a similar rise in GDP. In fact, GDP is decelerating while debt growth is accelerating, although both are growing.

So why am I not concerned about America’s mountain of debt?

First, the country transitioned from a production economy to a services economy, shipping most of its production overseas. But it still maintained its love of debt. So the new debt has gone toward consumption as opposed to capital investment, which dings GDP growth because equipment and inventory builds occurred more often outside of the U.S. Low interest rates have exacerbated this trend because higher returns are more easily achieved overseas.

Second, a large debt balance shouldn’t be a concern. Debt is only a concern if you can’t pay it. And even ignoring our ability to always pay debts by printing new money (something S&P ignored in August 2011), the U.S. government is incredibly solvent. Consumer and corporate defaults are also under control. 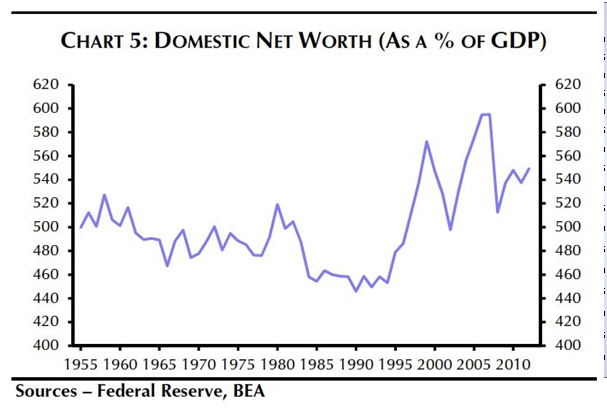 Let’s get a better grip on reality. The U.S. is fine so far as total debt goes. Politicians that hammer home the “too much debt” argument are drastically misrepresenting the current situation – doing it to their gain too, nonetheless. In fact, we could very easily increase our total debt balance without harming the ability to pay it because our assets are so much greater than existing liabilities.

New debt should be no problem. How America spends its money? I’ll be the first to admit, that’s a completely different story.