Since October 2017, the earnings season strategy has made 86 trades in total with a win ratio of exactly 80.2%. Sixty-nine winners, 17 losers. Our cumulative total return stands at 760.2%.

Best of all, as you will notice in the chart below, these are all one-day trades. 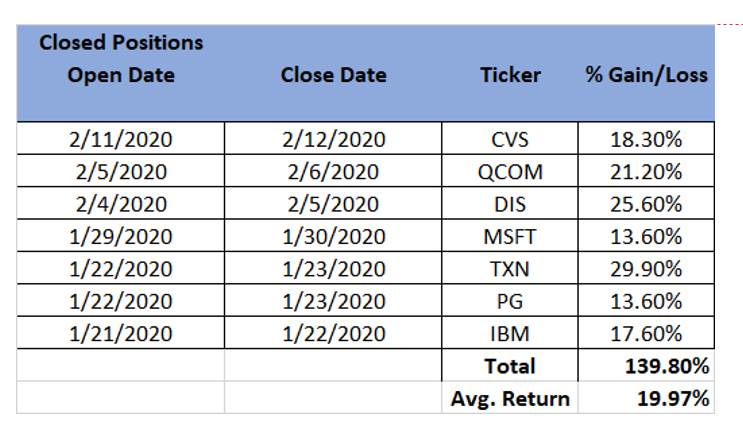 Simply put, it’s all about quality over quantity. Anyone can make a bunch of trades and hope for the best, but we don’t want “hope” on our side, we want lopsided probabilities on our side.

We want to know exactly what our probabilities of success are for each and every trade before we even place a trade . . . and each trade we place usually has a probability ranging from 82% to 86%.

No one has a crystal ball. So, if you approach earnings with the “I think” mentality, you will fail. You’ll fail particularly over the long term because your probabilities are, at best, a coin flip . . . 50%.

We use math and statistics as the foundation for our trading approach. We don’t guess.

We take advantage of only the best opportunities the market has to offer. We don’t settle for mediocre trades just because we want trading action. If you want action, go to the casino.

In the past, earnings season was for speculators, day traders . . . aggressive investors willing to take big risks while seeking a home-run trade.

As we all know, home runs don’t occur often. In fact, the average baseball season witnesses just 3% to 4% of total at-bats going over the fence.

In the past, the percentage of hitting it big with an earnings season trade was about the same percentage.

But the earnings season game has changed . . . drastically.

Now we have the ability to place trades in specific stocks with an 80% probability of success in this earnings season strategy.

More importantly, earnings season trades are not affected by overall direction of the market. So, we have the ability to make a nice return even if the market is headed south.

For instance, as we all know, the latter part of 2018 was incredibly challenging. Most investors saw a drawdown of roughly 20%. Yet we made 70.9% during the last quarter of 2018, even as the overall market moved sharply lower.

You can get all of the details by reserving a spot in my FREE webinar.