You may have heard of Svalbard.

It’s a fortress on a rocky island in the North Atlantic, now housing a massive seed bank, designed to preserve known plant species in the event of worldwide nuclear holocaust or some other calamity that might wipe out plant life – especially food crops.

The point of Svalbard is to protect the world’s most vital plant life. Note, however, that unless you work at Svalbard, you will never get access to these seeds. These seeds are not for you.

Svalbard is funded in part by the Gates Foundation (of Bill Gates) and a handful of other foundations of the super-rich.

I don’t know who they’re for. Presumably, any calamity that would destroy plant life would also destroy human life. And in that event, I’m guessing that the last thing any survivors will be able to do is to take an ocean journey to an inhospitable and remote location near the Arctic circle.

I mean, take a look at the one and only entrance to the Svalbard seed vault: 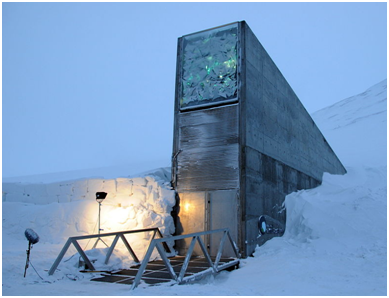 Doesn’t exactly look like a place you can drive the family minivan to see.

So Svalbard isn’t for you and me.

But the idea of a seed vault can be.

I don’t see any reason why we shouldn’t own a mini seed vault of our own. I’m not saying we’ll see some kind of global food shortage or a Mad-Max type of apocalypse.

I’m just saying that you don’t wait until your house is on fire to get it insured.

Personally, I own a small selection of organic seeds, of plants I know I can grow in my area and in a variety of fruits and vegetables I already enjoy eating.

I have corn, beans, lettuce, tomatoes, peppers, peas, onions, squash and a handful of other plants.

I have an apple tree on my property, too.

And I have just enough gardening know-how to potentially survive a few lean months living off the land.

If Bill Gates thinks it’s a good idea to spend millions of dollars to send seeds to the North Atlantic, why not spend $100 for yourself to have some seed security?