At the beginning of 2012, I wrote about Freeport McMoran (NYSE: FCX), calling it my favorite stock of the year.

“It's the biggest copper miner in the world.

It owns the mining rights to three of the world's largest copper mines – one in Utah, one in Indonesia and one in South America.

According to the 2011 Forbes 2000 list, Freeport is the also the highest  ranked gold mining company.

Even better: Freeport currently trades for less than 10 times earnings, and they pay a 2.2% annual yield.

Even for a big boring mining company, 10 times earnings is cheap. The entire sector is cheap now too – with the average PE ratio just above 10.”

Typically, this company trades pretty closely with the broad market. It’s a huge multi-national corporation, it’s in the S&P 500 and being that it’s the largest copper miner, it tends to rise and fall with the general market.

But right now, it’s completely decoupled from the broad trend: 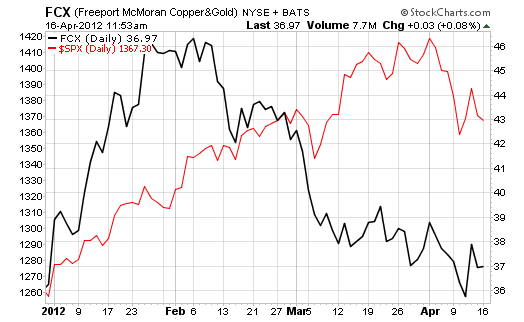 In part, that’s because copper prices have taken a bit of a breather since mid February. You can see how FCX reacts pretty severely to even slightly lower copper prices: 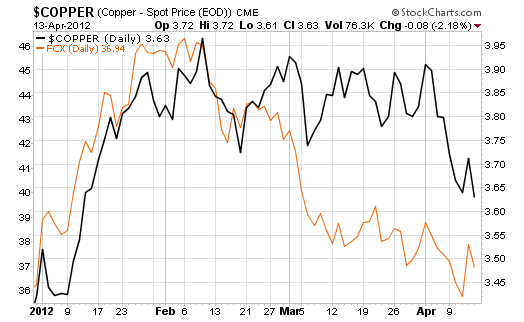 And FCX earnings growth has not been stellar over the last year or so.

Right now, the company sells for close to 7 times earnings. That’s super cheap. And it pays a better-than-10-year-Treasury dividend of about 3.4% annual yield.

If you’re looking for a safe company in the commodity sector, I think you’ll be handsomely rewarded over the long term if you buy shares of Freeport-McMoran today.

Take a look for yourself.