Carl Icahn owns 88% of his public vehicle, which is a good thing, because that means he has to care about shareholders since he’s the largest one. Icahn is always interesting, and his portfolio is always compelling, so I eagerly await each quarter’s Icahn Enterprises LP (NASDAQ: IEP) earnings release. Let’s see what this one had in store and learn more about Icahn’s approach. 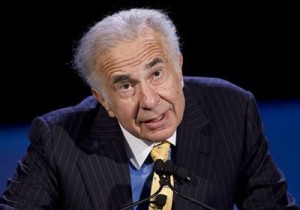 Icahn Enterprises had first-quarter revenues of $4.5 billion, or $1.28 per depository unit, which is equivalent to $162 million. Net income was $161 million.

Adjusted EBITDA (earnings before interest, taxes, depreciation and amortization) was $575 million. That is a huge number. That means cash flow from all of his operations is enormous. I love companies with high cash flow.

I do not think quarterly or annual comparisons regarding Icahn Enterprises make sense, because Icahn buy and sells many different public companies within his company’s portfolio, making historical comparisons pointless.

Still, just so you know what happened last year, Q1 2014 revenues came in at $5 billion, while adjusted income per depository share was $0.77, or $92 million. There was a net loss of $29 million, but adjusted EBITDA was still $221 million.

Because Icahn Enterprises is really more like a hedge fund, the best way to determine its success is to compare it to its peers – and you’ll be shocked to find out how well it has done.

Icahn’s approach has been to use an “activist strategy.” Thus, for many years, he has taken the approach that an undervalued company is going to resist a takeover. He thinks that’s wrong. If a buyer has tons of cash, it will also be able to get debt very cheaply. Together, all that capital can allow a buyer to scoop up another company in the same sector and move toward 800-pound gorilla status. The buyer is also helped, because it takes that cash, which is earning very little, and uses it to buy an asset that will provide a greater return.

Should you buy, sell or hold Icahn Enterprises? There’s no real way to assign a valuation to the stock, so just as we do with Liberty Media (NASDAQ: LMCA), where you are putting your chips behind John Malone, you are rolling the dice with Carl Icahn. So far, they’ve always come up winners.