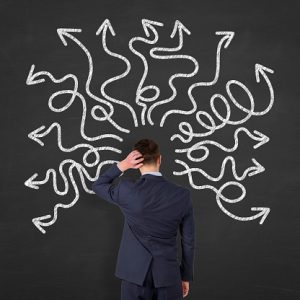 Just look at one of the more reliable indicators of future market direction known as the put/call ratio.

The put/call ratio is a measure of the daily and weekly volume of puts and calls in the market.

A volume of too many put buyers signals a market bottom is near, while a frenzy of call buyers indicates a market top is on the horizon.

Jason Goepfert, esteemed analyst at Sentimentrader.com, recently stated, “Speculative trading picked up last June, lasted through July, then exploded in August, preceding a 13%+ correction in many of the most active names in September. This go-round, it picked up in November, eased a bit in December, now has exploded again as we enter February. It’s occurred to such a degree it defies explanation, with record speculative activity among the smallest of traders. The four-week sum has gone parabolic again.” 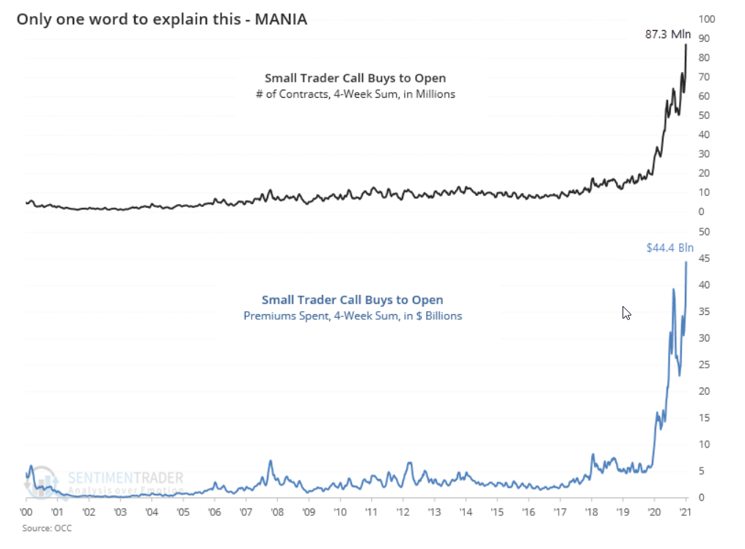 As you can see above, this options mania has reached levels that can easily be defined as parabolic. Dare we say, “irrational exuberance.”

Now most investors might attribute the sharp increase in call buying to the recent surge in GameStop and other Reddit-fueled high-flyers . . . but those investors would be wrong about the options mania. For one, most of the option action has proven to be in puts, not calls. Furthermore, the call buying volume has come in some of the bigger names like Apple, Tesla, Microsoft, Amazon and many others.

So how has this call buying frenzy affected the put/call ratio?

Well, as for the put/call ratio, we are seeing some of the lowest readings since March 2000. And when the put/call ratio  is low, particularly at an extreme, it tends to be a sign that there are challenging times ahead and the easy money is firmly in the rearview mirror.

Trade of the Week

Last week, as stated in The Strike Price, we exited our VIX trade for a nice profit. Now it is time to exit our CVX trade for another profit.

On Jan. 10 I sent a trade in The Strike Price that involved Chevron (CVX).

With CVX trading at $91.77, I sold some puts for roughly $1.45. If you wish to learn more about the trade, all of the trade details are in the Jan. 10 edition of The Strike Price.

I will be back with another trade next week, potentially mid-week, that takes advantage of the near-term speculative extremes in the options market, so stay tuned!

My intent going forward is to present you free ideas in the Sunday edition of The Strike Price and throughout the trading week.