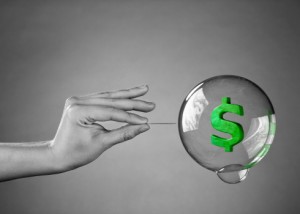 Silicon Valley is littered with stories of genius college students dropping out to do the tech startup thing.  The ones that go bust are rarely heard of.  But success stories like Mark Zuckerberg and Facebook (NASDAQ: FB) capture the imagination of capitalists seeking to invest in the next great thing.

Like many tech success stories, this one starts at Stanford University. Students Evan Spiegel and Bobby Murphy were working on a project for their product design class.  The idea was novel at the time: an app that would allow for the sharing of photos. But unlike Facebook and other photo-sharing apps and web sites, the photos would only be temporary available. After a set period of time, they would be deleted.

Most of their classmates were skeptical.  Why would a user not want their pictures to be permanent or public?

The reason is simple: in a world where parents monitor their kids’ Facebook accounts and college admissions counselors review applicants’ Twitter history, privacy is a big concern. And these two Stanford students decided to capitalize on those privacy fears.

Spiegel and Murphy have turned their concept into a red-hot mobile app called Snapchat. It’s been rapidly gaining popularity among young people who want to privately share images.

The photo-sharing service is gaining lots of traction.  Yesterday, Snapchat said that its users now share 400 million photos per day – an increase of 100% since June.

Thanks to its skyrocketing popularity, SnapChat has attracted more than $74 million of investments from top-flight venture capital firms, including Benchmark Capital.

Big Internet and social media companies – including Facebook, Google, Microsoft and Yahoo! – are all on the lookout for the next app that threatens to steal their users and cut into their profits.  That’s exactly why Facebook bought Instagram for $1 billion last year.

So it shouldn’t be any surprise that Snapchat is attracting similar attention from the big tech companies.  Last week, The Wall Street Journal reported that Snapchat had rejected a $3 billion acquisition offer from Facebook.  A prominent tech writer says that Google (NASDAQ: GOOG) offered $4 billion.

That’s a huge valuation for a young company with zero revenues.  As recently as February the company was valued at just $60 million.

Individual investors like you and me rarely have an opportunity to get in on the ground floor of the next big thing. But that hasn’t stopped investors from chasing social media stocks once they go public.

Last week, I warned you about the Twitter NASDAQ: TWTR) IPO, which soared 73% in its first day of trading.  Shares trade at an astounding multiple of 40-times expected 2013 revenues. Note: that’s a multiple of the company’s sales, not profits.

But Twitter isn’t the only richly priced social media stock. Internet stocks have been one of the best-performing sectors of late. In the last year, the Dow Jones Internet (NYSE: FDN) ETF is up 51%. That’s enough to beat the S&P 500 index by an impressive 22%.

The performance of specific Internet stocks has been even more impressive.  Despite small profits, the share prices of select companies have been soaring this year.

The Next Internet Stock Bubble?

As those lofty multiples suggest, the share price of certain Internet stocks have diverged from the fundamental performance of the business.   Investors are simply making speculative bets that rapid growth will continue to drive up valuations.  Though not a public company, Snapchat appears to be an extension of that rampant speculation.

Eventually, the internet stock bubble will burst again. And when it does, it’s going to be really ugly.  When investors start caring about pesky details like profits and P/E ratios, the valuations of many Internet stocks will come crashing back to more reasonable levels.

In my real-money $100k Portfolio investment advisory, my subscribers and I have been profiting from Netflix (NASDAQ: NFLX).  But after riding this stock to 374% gains over the last two years, we’re starting to take profits. If you own any highflying Internet stocks that are trading at rich valuations, I encourage you to do the same.

Snapchat’s rejection of Facebook’s $3 billion buyout is simply a sign of the times.  The company’s founders can only see the opportunities on the horizon, without consideration of the potential risks that lie ahead. We may look back at this event as the pinnacle of the second Internet bubble.

Protect your profits. And sell some of your tech winners now, before the bubble bursts again.

Own this Stock Before Dec. 31st — The Day Mobile Takes Over

Soon, the majority of Internet traffic will originate from mobile devices including smartphones and tablets. And even though Apple is selling over 200 million iPhones this year alone… Here at Wyatt Research, we’re NOT adding shares of Apple today. We’re recommending the one company no one is taking about… the one reaping massive profits each time a new Apple or Samsung smartphone is activated. In fact, its stock is set to soar 117%! And its shares are already on the move – it’s up 20% in the last month alone! So, before this stock moves any higher, read our latest report for all the details: Click here for the full story.