By now, most of us have heard about the $2 billion loss (and growing) at JP Morgan (NYSE: JPM).

You can debate the decisions by the too-big-to-fail bank, but as I always say, that is just noise. We are here to learn how to make money, not debate the ongoing failures of the big banks. 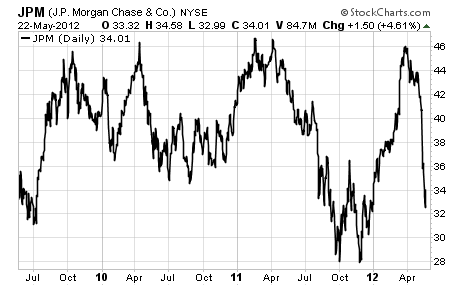 As you can see in the chart above JPM has taken a huge hit since the beginning of May. The fear is palpable and nothing displays this more accurately than the increase of implied volatility (IV) within the stock.

Typically, JPM trades with an IV similar to the VIX, but currently June options have a 47% implied volatility, 20% greater than the VIX.

What does this mean?

It means options prices are rich in JPM and when prices are rich we want to sell options using a credit spread strategy. But there are various forms of credit spreads. Which one would be the most appropriate for an assumption that JPM will either move slightly lower, consolidate and trade range-bound or move higher? Either the bull put spread or the vertical put spread.

By selling a vertical put spread I am able to create my own probability of success while at the same time defining my risk. Meanwhile, selling a bull put spread allows for a margin of error. As long as JPM closes above my chosen short strike the trade is profitable.

The first thing I do is to choose a credit spread with a probability of success above 65%.

Here is the hypothetical trade:

The point is to manage your risk in a way that you're comfortable doing. If you're brand new to options trading, it might make sense to keep your position size small.

Again, the goal of selling the JPM vertical put (credit) spread is to have the underlying stock, in this case JPM, close above the 29 strike at July expiration.

JPM would have to move over 15% from its current price of $34.00 before the trade begins to reach break-even. The trade will suffer its max loss if JPM moves lower than $27.

I hope this is helpful for some of you who are new to options. It is my goal to help you understand some of the more effective ways to trade options and not use the highly speculative methods that have been touted over the years.