I’m going to write today’s issue under the rash
assumption that we’re already experiencing a double dip recession. I
think such a recession has important implications for gold and gold
investments, for the simple fact that severe downward trends in the broad
market usually have deleterious effects on every asset class – at least
for the short term.

If it happens again, we’ll get another great opportunity
to load up on gold stocks as they get temporarily dragged to hell by the
broad market.

So, before I
tell you what to look for, here’s my brief reasoning for why I think
we’re in a double-dip recession.

Q2 of 2010 is in the books, and the broad market is down
nearly 12% over that 3 month period. I’m using the S&P 500 as a proxy
for GDP. Typically, stocks in the S&P 500 are a leading indicator for
GDP, so it’s not a perfect system, but it’s good enough for today’s
discussion.

I know – the usual definition of a recession is: “a
decline in GDP for two consecutive quarters” – but if you look at a chart
of the S&P 500 over the past two quarters, that definition is small
consolation: 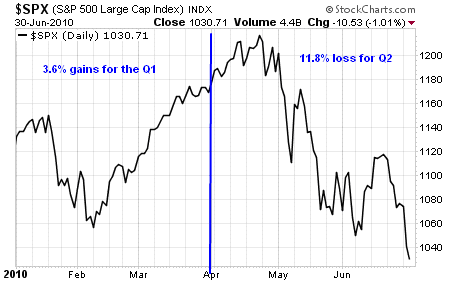 The criticism of that definition is that it’s backward
looking. “We won’t know we were in a recession today until we can
look at the numbers 6 months later” just seems like a lazy,
Pollyanna excuse.

I’m not a market cheerleader, nor am I a doomsayer – but
there are few bright lights in the market today, save one – gold. A
significant part of my larger investment thesis, is that gold is a safe
investment vehicle when every other vehicle has crashed and is
burning.

Check out the
chart below to see how gold investments have lived up to my thesis
recently: 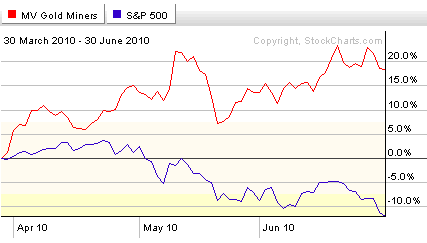 This chart plots the performance of the Market Vectors
Gold Miners ETF (NYSE: GDX) which holds the biggest
publicly traded gold stocks in the market (in red) against the S&P
500 (in blue) for Q2 2010.

The outperformance of GDX is pretty impressive – but
look at the long-term effects of a secular bear market on gold stocks;
here is a performance chart showing the same thing – GDX vs. the S&P
500 since January 1999. 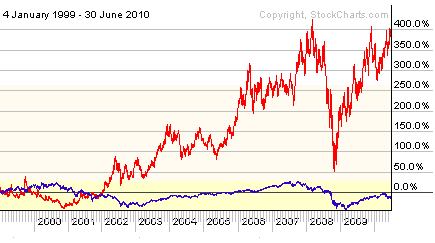 You’ll note the huge dip in GDX at the end of 2008. That
was the beginning of the recession in the broad market, and it
represented a great opportunity to buy gold stocks.

For months I’ve urged you to buy gold stocks – and I
certainly haven’t changed my opinion. But if I’m right, and we’re in the
midst of the double-dip, then you should look for any weakness in your
favorite gold stocks as a time to buy.

Now, I don’t know for sure if gold stocks will get
slaughtered along with the broad market like they were in late 2008/early
2009 – but it’s something to look for.

In the meantime, you should be averaging into these gold
stocks – and the GDX ETF is one great way to do so.

That’s because while gold sells near its all time highs,
gold stocks are still playing catch-up. That increased profit capacity
from higher priced gold hasn’t hit their bottom lines – yet.

Gold mining stocks typically magnify gains made in
gold’s price, and right now they’re still cheap on that basis. Even if we
don’t get another great buying opportunity, I still expect many gold
stocks to double in the next 12-18 months. Buying these companies today
gives you exposure to the increased earnings power of companies that can
mine gold for much less than the spot price.

My favorite low
cost gold producer currently sells at a huge discount to its gold
reserves. Every ounce they mine gives them nearly $800 in pure profit.
They’re expected to mine more than 70,000 ounces this year – which means
$56 million in profits for this $200 million market cap gold miner.
That’s huge. You can
click here to read the full write-up on this company and find out the
rest of the story.