The dollar is on the rise.

That’s good news for people who hold dollars. It means that the dollars you spend today stretch further than they did yesterday, two weeks ago or even a couple months ago.

But it’s important to remember that it’s only a short-term trend.

As you may know, the long-term trend line of the dollar is shockingly abysmal. According to the rosy estimates of the federal government, the dollar has lost over 80% of its value since 1971, when we officially ditched the gold standard.

Of course, I suspect the real data would be much worse.

So what does it mean when the dollar rallies for two straight months – as it recently did? 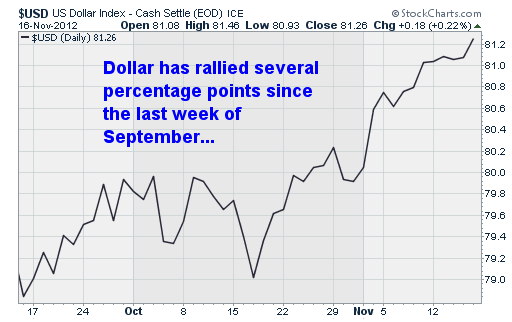 It’s an anomaly, and it’s the reason why we’ve seen stocks tumble alongside gold, silver, oil – you name it.

That’s because today, the dollar is always the divisor. Everything is priced in dollars, so short-term dollar strength necessarily means lower prices in everything.

So you look at the value of the gold or silver you own, and you think, “Shucks, my precious metals are losing value.”

But that’s the wrong end of the telescope to look through.

Your gold and silver have exactly the same amount of utility they had two months ago. They do! They still protect that portion of your savings from inflation and currency crisis.

The way to approach a rising dollar is to look at the assets you’d like to own more of. With a stronger dollar, each dollar necessarily buys more of the assets you really want.

It’s good news. It means you can still buy gold and silver – and you can buy them for less than you did even a couple months ago.

There has rarely been a time in this commodity bull market when you could expect to pay less in two months than what you pay today.

So take heart. And take aim at that next batch of coins, or oil stocks or agriculture companies. Because today they’re relatively cheaper than they have been in a while.

And if you pay attention to the history of the dollar, and where it’s likely to end up – you know that this dollar strength is a trend that will soon pass.