Was your portfolio taken to the woodshed on Monday? Blame the Broncos defense. 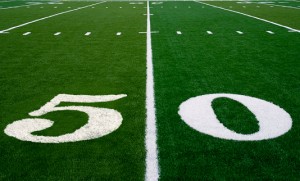 As I’m sure you know by now, the stifling D of the AFC-champion Denver Broncos spurred a 24-10 victory over the Carolina Panthers, the NFC’s representative in the Big Game.

The next day, while all the Monday morning quarterbacks were dissecting Cam Newton’s disappointing performance, the Dow dropped 178 points.

Of course, I jest about the significance of the so-called “Super Bowl Indicator.” It’s about as significant as Punxsutawney Phil not seeing his shadow this past Groundhog Day.

But I put a lot more stock in the “January Barometer.” My colleague Andy Crowder recently wrote an extended article about the stock market predictor coined by Yale Hirsch in the 1972 edition of the “Stock Trader’s Almanac,” so I won’t go into a lot of detail in this limited space. But in simplified terms, it theorizes that as the S&P 500 index goes in January, so goes the year.

So, if you adhere to the January Barometer, you have roughly the same odds of making money in an S&P 500 index fund this year as the Panthers had when they correctly called tails at Super Bowl 50.

The Panthers won the coin toss, but had no solution for the Broncos’ Von Miller, who became just the third linebacker to earn MVP honors in the Super Bowl’s 50-year history.

One can only hope that the market doesn’t get similarly sacked by the economic headwinds rushing it from all sides in 2016.

Here are some of my favorite Wyatt Investment Research articles of the week:

Follow Buffett’s Lead in the Refining Sector, But Not His Stock Pick – For several quarters, Warren Buffett’s Berkshire Hathaway (NYSE: BRK-B) has been buying up Phillips 66 (NYSE: PSX), one of the largest U.S. oil refinery companies. In January, Berkshire bought even more, taking its stake in the company to more than 13%. There’s good reason that Buffett is the world’s biggest Phillips 66 bull. But there’s a better bet in the refining sector for the average investor.

What to Do if There’s a Market Meltdown – In the current environment, one big-name bond default or energy bankruptcy is all it could take to produce a worldwide market meltdown. But there are steps disciplined investors can take to protect their portfolios even if the worst is yet to come.

Coca-Cola Sets Its Sights on African Expansion – In an effort to adapt to the changing consumer landscape, Coca-Cola (NYSE: KO) is turning to M&A. Coca-Cola has an agreement in place to acquire Chi Ltd., which is Nigeria’s leading dairy and juice company. Coca-Cola has deep roots in Africa, and Chi has a very similar product portfolio, making it a natural fit.

The New Agricultural Powerhouse – If ChemChina’s $43.8 billion all-cash offer for fellow agriculture chemicals and seeds company Syngenta (NYSE: SYT) is consummated, it will mark the biggest ever overseas purchase by a Chinese corporation. China is currently the second-biggest seed market on the planet. This deal will make ChemChina the world’s largest seed company, and it will cement its place as the biggest agrochemicals provider in China. But the deal is about more than just China. It is also intended to crimp the plans of ChemChina’s rivals in the $100 billion agrochemicals and seeds sector.

Can the Barbie Makeover Save Mattel? – Last year, total worldwide sales of Mattel’s (NASDAQ: MAT) Barbie dolls fell 10%, while American Girl sales fell 7%. But going forward, Mattel has announced curvy, petite and tall versions of Barbie. This comes just a few months after the company announced its Fashionistas line, which feature a broader assortment of Barbie dolls with a greater number of skin tones, eye colors and facial structures. Could the recent Barbie makeover be the catalyst that revitalizes Mattel’s sagging stock?

Amgen Stock Facing Critical Support – While no investor is ever happy with a loss, shareholders have to be thankful that Amgen (NASDAQ: AMGN) has held up as well as it has. Since peaking last July, the NYSE Arca Biotechnology Index has lost 40% of its value. Yet Amgen shares are only down 10.4% during that time period. But despite holding up better than the industry as a whole, the price decline has brought Amgen to critical support.

Is It Time for Income Investors to Abandon All MLPs? – In today’s world of sub-$30 per barrel oil, many energy MLPs find that expenses outrun revenue. Master limited partnerships pay out nearly all earnings to investors. This means that MLPs must continually tap credit and equity markets to fund capital expenditures and to grow. That’s a problem when lenders are unwilling to lend and buyers are unwilling to buy feebly priced units. That said, it’s worth highlighting the fact that not all MLPs are alike.

A Lending Company That’s Too Cheap to Ignore – While the Great Recession forced this lending company into bankruptcy, it emerged much better financed. With shares off more than 30% year-to-date, it’s trading at just 50% of book value – a deep discount to other credit servicing companies. It also has a potential catalyst in an activist hedge fund that’s pushing the company to split up.