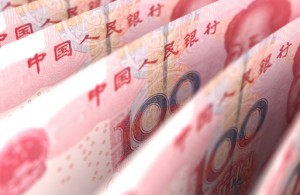 It might not be entirely fair to blame China for the sharp reversal in the market on Tuesday. Or the fact that the S&P 500 is barely above break-even year-to-date. But it wouldn’t be completely unfair either.

After all, the market turned abruptly on Tuesday upon news that the People’s Bank of China (PBOC) moved to devalue the yuan by 1.9%. And yuan devaluation may easily accelerate. According to Credit Suisse (NYSE: CS), as of Tuesday afternoon the forward market was factoring in another 3% decline in the yuan over the next 12 months.

The Chinese government said that the daily fix for the yuan will be decided by the previous day’s close. In basic terms, this means that the yuan has become more of a free-floating currency, which is theoretically a positive as it factors in market forces.

But the government won’t cede complete control, and will maintain a trading band of 4% (2% up or 2% down). In fact, The Wall Street Journal reports that China already stepped in on Tuesday, after the yuan had fallen by nearly 2%, to prop it up.

This development is having an impact on far from just growth stocks. But given that many leading growth stocks, especially technology stocks, have significant exposure to Asia, the story is hugely relevant to us and worth discussing.

This is another incremental move by China to try and steer its economy in the right direction and spur consumer spending. And the market’s reaction shows, once again, how we live in a global economy where there are so many factors contributing to stock market direction that it’s essentially impossible to predict whether the next move will be up or down.

The best investors can do is take incremental steps to ensure they are participating in the greatest growth trends, and try to avoid those areas of the market that are contracting – not to mention those that are so filled with uncertainty that it’s just not worth getting involved.

Now, more specifically, what does this move by the PBOC mean to U.S. growth-stock investors?

For starters, it obviously means that the Chinese government is stepping up its efforts to stimulate growth within the country. Theoretically, that should be good for growth investors, as it would help consumer spending in the region.

This is just the latest in a series of steps that the government has taken, and will likely continue to take, to stimulate growth and soften the blow of deflating real estate and stock market bubbles.

The flip side of this is that companies that produce goods (or purchase supplies) from China should enjoy lower pricing. These two factors may balance out, depending on the company in question.

And I should also add that any impact is really company specific, because it depends on whether goods and/or supplies are priced in dollars, or another currency within the Asia-Pacific (APAC) region. (Note that devaluation of the yuan will likely have a similar effect on other currencies in Asia.)

A good example of how this move hurts an individual company is provided by Volkswagen Group (OTC: VLKAY), a company I talked about on Monday. Volkswagen is facing a host of challenges to growth, including sales exposure of nearly 40% to China.

On Monday, shares of Volkswagen closed at $42.80. After the devaluation move was announced by the PBOC, Volkswagen closed down by 4% on Tuesday. The stock fell another 2.4% on Wednesday. Clearly this company is being hurt by what’s going on (or not going on) in China, both in terms of sales and in terms of the share price.

For example, the water-technology stock I recently recommended to Top Stock Insights subscribers also derives a significant amount of business from China. In the second quarter it reported that sales growth from China was up 15% over the past six months.

Yesterday the stock was down a few percentage points, but it’s not getting hurt nearly as bad as stocks such as Volkswagen. I attribute part of this resiliency to the fact that its goods are far more necessary than a new automobile, for example, and therefore the market is assigning a lower probability of contraction from market intervention in China.

With a lot of technology stocks the picture is more mixed. Investors will need to understand what proportion of revenue is generated from Asia (and China in particular), what the foreign exchange risk is, and what supplies are sourced from the region. Also relevant is any impact, positive or negative, on projected consumer spending in China from the PBOC’s moves.

The highly popular consumer-goods stock GoPro (NASDAQ: GPRO) provides a good example. Check out its latest 10-Q filing and you’ll note that it claims to have minimal exposure to foreign currency fluctuations because the vast majority of transactions occur in dollars.

That said, international sales in the second quarter were up 126%, and total international sales now make up over 50% of revenue. The company doesn’t specifically break out China sales, but it does state that over the last six months sales from Asia-Pacific countries are up by 123% and account for 14.6% of total sales.

The takeaway here is that GoPro has significant exposure on the consumer end of China, but not so much on the foreign exchange end of things. Should consumer spending in China falter, growth could get dinged, but at this point that’s a premature call to make – especially given that the move to devalue the yuan is intended to help increase consumer spending, which should, theoretically, help GoPro. But there’s a fine line, since foreign goods sold in dollars will be comparatively more expensive. So you can see how this gets a little complicated.

The move in the yuan has been dramatic and sudden. It caught most of us off guard. But now we have at least some sense of what to expect (more of a floating-rate currency with a 2% plus-or-minus band), and we know that the PBOC wants to devalue the currency by at least a few percentage points (some analysts suggest the yuan could remain 6% to 8% overvalued).

I think in the near term the majority of the impact on share prices has occurred, though I’ll be the first to admit I have no idea what moves the PBOC could take in the coming days and weeks. I do know that analysts and investors will be listening closely to every company with exposure to China to see if they’ll be impacted by the PBOC’s moves, and whether that impact will be a net positive or a net negative.

The best advice I can give without knowing your particular stock holdings is to pull up a company’s most recent 10-Q report and search for terms such as “foreign exchange,” “APAC,” “China,” “Asia” and “geographic region.” And read what management has disclosed about the potential impact of foreign currency fluctuations (particularly in the APAC region), sales exposure and supplier relationships.

Doing so will help you understand if, and how much, exposure your growth stocks have to all that is going on in China’s market these days.