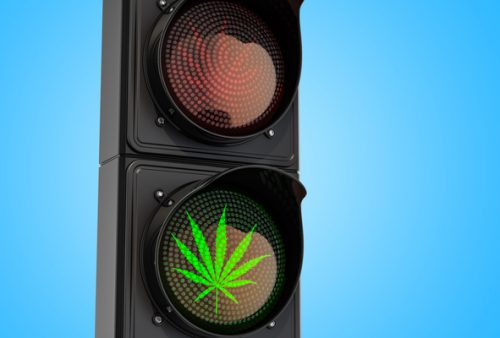 Amazon now sells 6,000 CBD products on its site. And this CBD company, one of the sources, is going public for just $1.25 per share.

We saw a nice reversal for stocks yesterday. Interestingly,
it came on the heels of the lowest consumer confidence number since February.
If you remember, stocks sold off hard at the end of January. By mid-February,
the S&P 500 was hitting 1,050.

A low consumer confidence number makes some sense when it’s
viewed in the context of a sharp decline for stock prices. But how do we
account for yesterday’s negative reading?

Basically, we don’t. Just between you and me, the “consumer”
is crazy. I don’t know exactly what kind of questions are used to come up
with the consumer confidence number, but there’s pretty much zero correlation
between what consumers think and the economy or stock market is doing.

Yesterday’s huge move took
the S&P 500 above 1,105 to close right at 1,115. TradeMaster Daily Stock Alerts’
Jason Cimpl told his readers he’s bullish going into next week. And yesterday’s
close at 1,115 will keep him from selling his latest round of upside trades.

That’s good news for TradeMaster
readers, because one stock they bought on Friday made a 50% move in
just two days. Jason’s bullish stance suggests there are more gains ahead for
this little beauty.

Jason is looking for a move
above the next resistance of 1,120 sometime in the next few days.

I hope you all had an enjoyable long weekend. I also hope you enjoyed the”subscriber’s only” market analysis video that TradeMaster Daily Stock Alerts Jason Cimpl shared with us on Friday.

Every Friday, Jason makes a video for his TradeMaster members where he shares his top-notch chart analysis and provides a forecast for the coming week that includes everything from the”big picture” view to specific entry points on his top stock recommendations.

Jason has identified virtually all of the important turning points for a variety of assets over the last year. His TradeMaster readers made money when natural gas prices bottomed in October of 2009. They were ready when the U.S. dollar bottomed in December 2009. They caught big moves in oil and were perfectly positioned for the tech stock breakout that started in March 2010. They even made money when the stock market sold off on the European debt news.

It was two weeks ago that I likened the ongoing Greek debt saga to a slasher flick bad guy that keeps rising from apparent death. The Greek story is truly one that will not die.

It should be clear by now that none of the parties involved are playing it straight. Greece has made several misleading statements about the size of its debt and its plans to pay it off. Germany has reneged on its promise of support several times.

Even the aid talks with the IMF seem to be taking far too long. In fact, this Greek aid process is taking so long that investors are starting to speculate that Portugal will not be able to get aid quickly if it needs it.

I can imagine that a few people were waiting for President Obama to follow up his declaration that he was opening up the East Coast shelf for oil drilling with a hearty “April Fools!” but he didn’t.

The decision to open up the East Coast shelf is sure to anger some people. Former Florida governor Jeb Bush was adamantly opposed to drilling off of Florida’s coast, even when his brother George pondered the idea. He felt that oil drilling might spoil Florida’s beaches and impact tourism.

I don’t know how current governor Charlie Crist feels about offshore drilling, but there will be plenty of vocal opposition. Imagine the irony as both environmentalists and conservative politicians lambaste Obama for this decision to open up oil drilling!

Stocks continue their upward climb. As TradeMaster’s Jason Cimpl  told us earlier in the week, the S&P 500 has kept its date with 1,150. And it looks poised to move higher.

The retail sales data from February is positive. Despite two crippling blizzards on the East Coast, sales still rose 0.3%. And if you strip out autos, sales were up 0.8%.

Normally, it makes no sense to ignore auto sales because they are obviously an important gauge of consumer spending, but in light of the recalls from Toyota (NYSE:TM), it’s reasonable to assume that some auto sales were simply postponed due to the uncertainty.

Sales were especially strong for electronics and at restaurants and bars. Sounds like consumers are celebrating their new iPhone purchase over a beer. That’s probably led to a surge in drunk-texting.

Retail sales from January have now been revised lower two times, from an initial reading of +0.5% to the current +0.1%. Funny thing about this rally – economic data is consistently revised lower, and no one cares. The only exception I can think of is 4Q 2009 GDP, which was actually revised slightly higher.

Economic data has been improving. But it says more about the bullishness of investors that they are consistently overlooking negative data. That gives me more confidence that we will be seeing new highs for the major indices soon.

Now, let’s wrap up our week with some Reader Mail…