Today I want to talk about a metal that gets little love or
attention in the mainstream media – until it dramatically increases in
price.

I know you’ve heard such claims before – but I’ve been
scouring the headlines of major news sources, and no one is talking about
this metal, even though its price is scratching highs not seen since
2008.

I’m talking about
copper – a metal associated with boom-time construction. Every new building
on this planet needs copper pipes for plumbing and copper wire for
electricity – at the very least.

So…if housing is still in the toilet, and commercial real
estate is still circling the drain, why would copper prices keep surging
towards pre-recession highs? 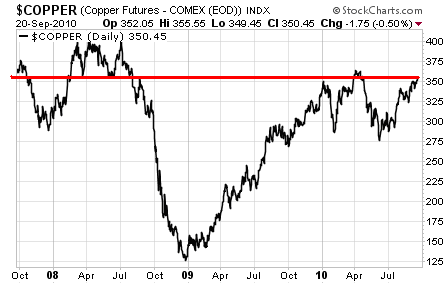 Copper stocks
(physical inventories of copper, not the stocks of copper mining companies)
are falling to levels not seen since early Q4 2009. Here’s a chart showing
copper warehouse stocks at the London Metals Exchange over the past
year: 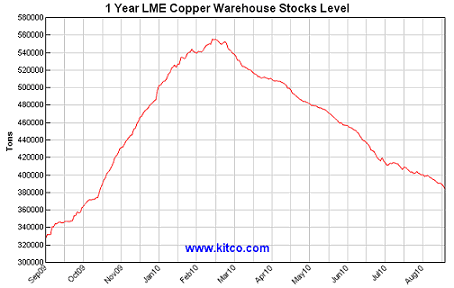 Couple this dwindling supply with slowed, but quite robust
growth in Chinese construction, and you have a recipe for higher
prices.


Yesterday, I talked about how rising oil prices will set a higher floor
for all commodities – independent of inflation. Copper is no exception. It’s
at least as oil intensive to bring it to market as most other commodities.
Looking at the chart below, you can see that oil and copper tend to trade in
tandem:

So, I expect higher oil prices to contribute to a price
floor on rising copper prices.

And I’m (thankfully) not the only one talking about copper.
It’s true that the mainstream media isn’t interested, but there are plenty of
folks out there beating the drum for copper.

Let’s be clear: copper will never be as sexy as gold, no
matter how high its price goes. But some of the same folks who were talking
about gold prices climbing earlier this year are now shouting the same
message regarding copper prices.

I’m no fan of
global banking firms, but I’ve been pleasantly surprised at the solid
analysis coming out of Credit Suisse (NYSE: CS).

In June of this year, the Switzerland based banking
conglomerate predicted that gold could rise to $1,500 by the end of
2010.

With gold hovering around $1,270 that’s still somewhat of a
bold prediction, but Credit Suisse analysts made this prediction at a time
when gold was selling for nearly $100 cheaper.

Recently, Michael Shillaker a metals and mining analyst at Credit Suisse predicted
a 30 percent upside for copper miners by the end of 2010, with as much as
100% gains possible over the next two or three years.

It’s good to know I have some
institutional backing – and I’ve recently recommended that my readers pick up
shares of one of the largest copper miners on the planet:
Freeport McMoran (NYSE: FCX). In fact, I
did so just days after Mr. Shillaker made his bold prediction for copper
miners.

(You can read my Sept. 1 article about FCX by
clicking here.)

Since my recommendation, shares have moved 9% higher. I
don’t know if this company will surge another 21% to round out Mr.
Shillaker’s prediction, but I’m not interested in “trading” shares of this
company over the short term anyway – in fact, I like this company as a
long-term play on sustained higher prices for copper as well as gold (it
mines both).

As long as I’m bullish on these metals, I like shares of
Freeport McMoran under $80 a share. That’s a bit lower than where the stock
trades today so look for opportunities to buy the dips. As always, do your
own research before pulling the trigger.