I firmly believe that Ben Bernanke and I share a common
viewpoint. We both have no idea what he’s going to do four months from
now.

There’s simply too much uncertainty. We don’t know what’s
going to happen with the multitude of economic indicators and whether they’ll
spell success or failure for his policies.

So let’s back up and look elsewhere for certainties. I think
I’ve found some bullish news for commodity investments.

As of this writing,
there seems to be little chance that President Obama and his colleagues in
the Senate and Congress will extend the Bush Administration’s tax
cuts.

Personally I think taxes as well as government, both state
and Federal, should be cut to the bone.

But my personal opinions have little to do with the truth of
the matter. I can only look at the world as it is and make recommendations.
The world as it should be is a matter for discussion over coffee or
cocktails.

And right now, we’re about to enter a 120-day countdown for
much, much higher taxes on investment income.

Long term capital gains will rise from 15% up to 20% for all
but the lowest income tax bracket. Let’s face it – most low income people
don’t invest anyway, so it’s essentially a 33% increase for all
investors.

The tax on dividend
income is going to be even higher – whereas today it’s taxed at the 15%
capital gains level, it’s going to be taxed as regular income, meaning you
can expect to pay up to 39.6%, depending on your income level.

So what are the implications?

My main concern is that institutional investors and
individual investors alike will begin to take a good chunk of capital gains,
if any, off the table over the next four months to lock in the lower rate.
They also might be somewhat inclined to reduce their dividend income and look
for alternate investments.

It’s almost a foregone conclusion that these higher taxes
will have a chilling effect on the broad stock market in the United
States.

If you have a significant portion of your net worth in the
broad market, it might be time to look for an exit for at least some of that
money – especially if you’re sitting on significant paper gains.

All of that profit-taking is going to go somewhere. Some of
it, I’m sure, will stay in cash. But much of it will get re-invested.

The trick is to figure out where it will get reinvested, and
I have to think that a significant portion of it will go into the commodity
sector.

Normally, it might
get reinvested in Treasury bonds and/or municipal bonds, but I simply can’t
wrap my head around the idea of buying a long-term government bond when
they’re yielding so little. I know that some of it will end up in Treasuries
and Munis, but I’m going to go out on a limb and say that more people will
look towards hard assets to anchor their wealth, as opposed to government
IOUs.

While I’m still long-term bullish on gold, I think silver
and silver miners are a much more attractive buy right now.

Silver recently broke out into a strong uptrend: 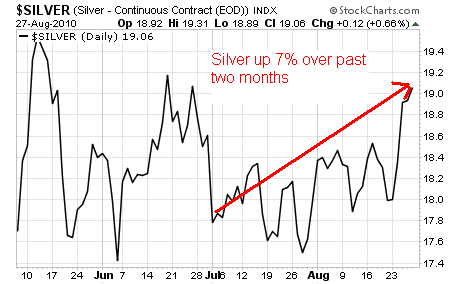 The good news is, silver is still inexpensive compared to
gold. I mean that on a nominal basis, of course, but also in terms of a
historical ratio.

Gold typically sells for about 55 times the price of silver.
But today, silver is selling at a substantial discount to gold.

The uptrend is in place, and with investors of every stripe
looking for a new place for their money, I think we can expect to see some
nice gains for silver.

I advise everyone I know to buy physical silver, as an
insurance policy protecting you from currency collapse. I own some physical
silver myself, but as an alternative there are a multitude of silver ETFs to
choose from. I normally tell my readers to steer clear of ETFs, but I
recently worked with my boss Ian Wyatt to put together a detailed report on
our favorite commodity ETFs, including an ETF that has actually outpaced
gains made in silver.

You can access the full write-up on these ETFs for free by
clicking
here now.