Today I’m cooped up in an Alexandria, Virginia hotel room while my
wife attends a
National Association of Drug Court Professionals
conference.

If you’re not familiar with drug courts, and how they can save our
criminal justice system huge amounts of money every year, you should read

this brief article in the Economist
about how drug courts keep drug addicted Veterans out of prison – by keeping
them clean and sober.

I won’t ruin the ending, but basically these courts seek to help
people beat their addictions instead of throwing them in jail where they’re
not likely to get much of any treatment – and their rate of drug abuse is
likely to increase. A novel approach…

Anyway, while I’m in the air conditioning, I’m answering reader
questions about how to meet commodity investment goals.


I’m 50 years old. I recently dumped my 401K investment company (which didn’t
do much of anything unless I called), and put the money in an account I
control. So, $300K to manage and not much time for the "investment noise"
you mentioned in one of your articles. Working each day doesn’t leave me
much time to investigate all the investment opportunities of the day. What’s
your suggestion for the top 3 things to invest in and not have to look at it
for 10 years?


Tim, thanks for writing in with a really tough question. I don’t know if I
have the exact answer you’re looking for, but I won’t shy away from this
fastball.


I think Tim has probably done himself a service by getting out of his 401(K)
now instead of waiting for it to tumble again. The problem with most of the
investments you can buy with 401(k)s is that they’re almost always heavily
dependent on the performance of the Dow. So you’re letting 30 of the largest
companies traded in the New York Stock Exchange dictate the success or
failure of your retirement account.


That doesn’t sound like diversification to me – which is supposed to be the
whole point of a modern portfolio approach to investing.


Anyone with access to a chart of the Dow over almost any period can tell you
that there are times when you should buy the Dow – and times when you
shouldn’t.


Before I get into my top 3 recommendations for Tim, I’d like to point you in
the direction of a simple tool that can tell you when to buy, hold and sell
the Dow.


It’s called the Q-ratio, and it takes a very macro look at how relatively
expensive the Dow is at any given time.


Basically, it divides the Dow index by the cost of replacing each business
in the Dow entirely. It sounds kind of arbitrary, but it gives you a very
specific look at how much you’re paying for the Dow at any given time. After
all, if the price tag on a business is significantly more than the cost to
build that business from scratch, then you probably wouldn’t buy that
business.


Likewise, if the price tag on, say, ExxonMobil (NYSE: XOM) was 50% LESS than
the cost to build Exxon from scratch, you’d probably jump at the chance to
buy it.


That’s a simplified explanation of what the Q-Ratio does. Here’s a
relatively updated (July 1, 2011) chart of the Q-Ratio: 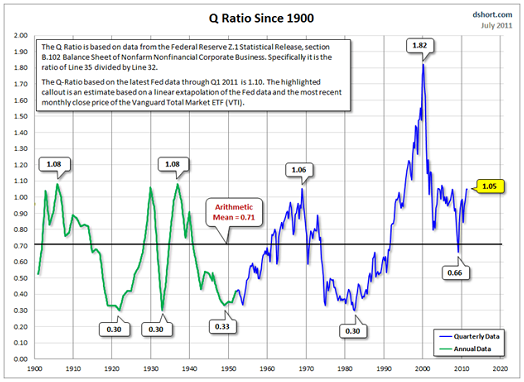 click here to read a more in-depth piece on the Q-Ratio.


As you can see from the chart above, Tim probably got out of his Dow-heavy
401(k) at a good time. Over the past 100+ years, the Dow fell precipitously
after hitting this approximate level.

So the question is, what
are the 3 things Tim should buy today to hold for the next ten years.

And it’s a tough question
right now because our Federal Government’s massive stimulus plans have flooded
nearly every asset class and made everything expensive.

But there are a few assets
that I’d like to own for at least the next few years – if not the next ten
years. I’ll leave the portfolio allocation up to you.

1. Gold (and silver). You’ve
heard me go on and on about gold. I own gold not as a speculation that inflation
will rise, or as a way to trade in and out of currencies. I view my physical
gold as liquid cash savings that can’t be inflated away. So whatever liquid cash
savings you deem necessary to hold near and dear – I’d move it into gold and
silver. I buy my gold and silver from

2. Energy. As expensive as
oil is you know it’s only going to get more expensive. And right now, you can
still buy natural gas investments for relatively cheap. My friend and colleague
Tyler Laundon recently completed an excellent natural gas research report.

But it’s not just natural
gas. Coal will be a great place to be for at least the next ten years. And
though you probably don’t want to hear it, uranium is probably a steal right
now. It could go lower, but not much.

Energy is a great place to
be because you know the world is going to keep using it. Even during another
recession or depression. People will cut every expense out of their lives
besides food, water and shelter before they cut energy. And there’s huge growth
in this sector in the developing world.

3. Agriculture. This one is
tricky because it seems so expensive right now. I think it will be a strong
trend over the next decade, but you need to pick your spots. Farmland prices are
off the charts. Softs (wheat, corn, soybeans, etc.) are pricey.

With all three of these
trends, I’d also look for ways to collect income and to then reinvest it.
Whether it’s in the form of dividends, or an options strategy, if you really
want to build your wealth over the next ten years, you need it to compound
itself.

Our Chief Options Strategist
here at Wyatt Investment Research, Andy Crowder, has been successfully trading
income-based options strategies for well-over a decade and enjoys helping others
learn his disciplined approach to trading options for income. Please do not
hesitate to email him at

[email protected] if you have any options-related questions,
particularly if they involve income-based options strategies.